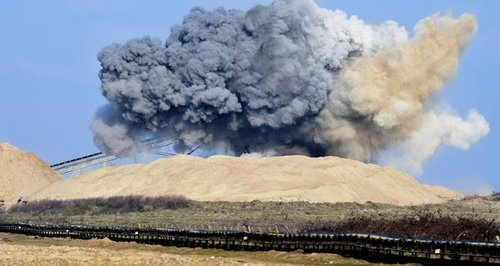 A huge WW2 bomb found on a building site in Bermondsey has been safely detonated.

The device could have led to "major loss of life" and significant damage to buildings if it had exploded, the soldier in charge of removing it said.

Senior Ammunition Technician John Lester said the 550lb (250kg) German device discovered in Bermondsey on Monday 23 March 2015 was a "a live munition in a dangerous condition" which had to be taken far from the city before it could be safely destroyed.

The Luftwaffe Sprengbombe-Cylindrisch bomb, which forced the evacuation of homes within a 220-yard (200m) radius when it was uncovered by builders, was blown up near the River Thames at Cliffe in northern Kent at 9am, the Ministry of Defence (MoD) said.

It said it had had reports that the explosion could be heard 10 miles (16km) away.

SAT Lester, of 11 Explosive Ordnance Disposal, Royal Logistic Corps, said: "This bomb was a live munition in a dangerous condition. It had been disturbed by some pretty heavy building machinery, which is never a good thing. Bombs don't like being bashed around.

"But once we'd uncovered it, we knew what we were dealing with and it was just a question of solving the puzzle quickly so we could get it away and the good residents of Bermondsey back in their homes.

"We knew we had to get it away to dispose of it safely because trying to deal onsite with a bomb that size, even under a controlled explosion, would cause significant damage to buildings, (and) property, and the risk of major loss of life in such a highly populated part of the city was very high."

Buildings around The Grange were evacuated as British Army bomb disposal experts and engineers built a protective "igloo" around the 5ft (1.5m) device to protect the surrounding buildings in case of accidental detonation.

The igloo was created from Hesco blast walls, like those used to build Camp Bastion and other military bases in Afghanistan during the conflict there.

The bomb was excavated last night by teams who had previously worked on Improvised Explosive Devices (IEDs) in Afghanistan and Northern Ireland. It was then transported to a site in Kent owned by Brett Aggregates for the detonation, allowing people in Bermondsey to return to their homes last night.