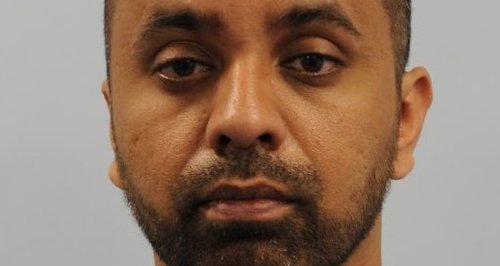 A London taxi driver's been jailed for building improvised bombs planted in Iraq that killed an American soldier.

Anis Abid Sardar, 38, from Wembley in north-west London, built improvised explosive devices (IEDs) as part of a "deadly" campaign to kill Americans fighting in Iraq in 2007.

In what is believed to be a legal first, he was convicted at London's Woolwich Crown Court of murder and conspiracy to commit murder.

One of the lethal contraptions caused the death of 34 year-old Sergeant First Class Randy Johnson, of 2nd Stryker Cavalry Regiment when it hit the armoured vehicle he was travelling in on September 27 2007.

Sardar was snared some seven years later after officials at the FBI's Terrorist Explosive Device Analytical Centre (Tedac) found his fingerprints on some of the bombs.

The defendant, who was wearing a grey tracksuit, showed no emotion as he was sent down.

The judge told Sardar that Sgt Johnson had been described by his commanding officer, Major Eric Adams, as showing "deep compassion" in leading his platoon.

He said: "It is therefore the saddest irony that when the eight-wheel Stryker vehicle containing the American soldiers ran over and exploded an IED it was Sgt First Class Johnson who was killed.

"He was buried in Arlington Cemetery and his family can be proud that he was awarded the Purple Heart and Bronze Star.

"Sgt First Class Johnson's loss was one of the sad tragedies in what was going on in Iraq in 2007.

"By the jury's verdict it is a loss for which you are directly responsible."

Mr Justice Globe described the IEDs built by Sardar and his co-conspirators as "professionally made" and "in effect landmines".

And he rejected Sardar's defence that he had been involved just once in bomb-making to protect the Sunni community from Shia militias.

The judge said: "I am satisfied so as to be sure that your actions were not solely focused on Shia militias. Your focus was either wholly or party American.

"I am satisfied that at the material time of the offences you had a mindset that made Americans every bit the enemy as Shia militias. Both were in your contemplation at all times."

Prosecutor Max Hill QC read a short message from Sgt Johnson's widow Claudia in which she said: "Thank you so much, it's a big relief to know that justice has been served. However, it does not change much for us. Randy will be greatly missed."

Henry Blaxland QC, for the defence, said in mitigation that Sardar had moved on from his role in the insurgency.

"He tried to put it behind him but it has come back to haunt him," Mr Blaxland said.

Sardar originally denied to police that he had been "directly or indirectly" involved in bomb-making.

But on the second day of his trial he admitted that fingerprints on two of four devices found in or around the road west out of Baghdad and linked to the case were his.

The defendant was stopped at Heathrow and his fingerprints were taken after he made his way back to the UK from Syria some two months after Sgt Johnson was killed.

In 2012, officers who were searching his London home as part of a separate investigation found an Arab language bomb-making manual with references to Islam on a computer disc.

Police have not clarified how the British and American authorities worked together to identify Sardar as a suspect.

The device that killed Sgt Johnson did not carry Sardar's fingerprints, but all four bombs had prints from his co-conspirator, Sajjad Adnan.

Prosecutors said the two men had worked together and with others to build and plant them.

Adnan - who is not a British citizen - was arrested after the bombings and handed over to the Iraqi authorities. His current whereabouts are unknown.

Jurors heard that Sgt Johnson told his comrades "Don't let me die here" after he was fatally injured near the road between Baghdad and the notorious Abu Ghraib prison.

Mark Aggers, who was serving as a gunner on the Stryker vehicle, was also left with serious shrapnel wounds, while three further servicemen suffered concussion.

Of the three other bombs linked to Sardar, two were recovered intact and one was safely detonated by a bomb disposal team.

But two soldiers from 2nd Battalion 5th Cavalry Regiment were seriously injured when a sniper shot them as they guarded one of the devices on March 20 2007.

Private Jesus Bustamente suffered gun wounds to his left knee, lung, colon, kidney and liver in the attack, while Private First Class Joseph Bacani was hit in his right buttock.