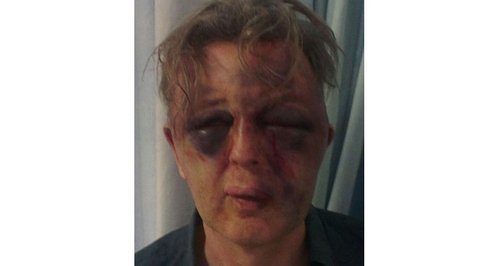 Four burglars have been jailed for a total of 64 years for injuring a university lecturer from Wimbledon so badly he was left unrecognisable.

Paul Kohler, 55, (pictured) suffered a fractured eye socket, a fracture to his left jawbone, a broken nose and bruising during the attack at his home.

His wife, Samantha MacArthur, 50, was also threatened by the intruders on the night of 11 August 2014.

Pawel Honc, of no fixed address, and Mariusz Tomaszewski, of Crusoe Road, Mitcham, south London, were both sentenced at Kingston Crown Court to 19 years after admitting grievous bodily harm with intent and aggravated burglary.

Oskar Pawlowicz, of Pitcairn Road in Mitcham, and Dawid Tychon, 29, of no fixed address, were both sentenced to 13 years after they pleaded guilty to aggravated burglary.

Sentencing the men, Judge Susan Tapping said they had targeted Mr Kohler's house either because they had the expectation of finding items of "significant value" to steal or because they chose the wrong address to collect a debt.

Mr Kohler, who was flanked by his wife and three of his four daughters - Eloise, Beth and Saskia - held his jaw and watched the men intently as they were given their sentence.

He hugged his daughters and wife and smiled afterwards.

Judge Tapping said that all the defendants had been under a combination of drugs and alcohol on the day of the attack.

Referring to the witness statement Mr Kohler gave yesterday, she said that it had shown his "generosity of spirit".

She told the defendants: "One matter it contained was for you to explain why his family and him were targeted.

"This explanation would help them all but your mitigation did not help at all or was at odds with what others had said.

"Without this explanation he understandably questions the true value of any remorse expressed."

Mr Kohler, who is head of law at the School of Oriental and African Studies in London, said yesterday that the defendants' actions "had nothing to do with immigration, and were simply an example of mindless thuggery".

The five-minute attack began when Mr Kohler went to answer the door at around 10pm while his wife, 24-year-old daughter Eloise and her boyfriend Geraint were upstairs.

The four men burst in wearing scarves to conceal their identities and blue latex gloves.

Mr Kohler was pushed to the floor and Honc sat on him and repeatedly punched him in the face while another man kicked him in the head.

He was also threatened by Tychon, who held a wooden cabinet door over his head ready to swing it down on him.

Two of the burglars went upstairs, pushed Ms MacArthur and covered her face, threatening to hurt her if she moved.

Eloise and Geraint were able to hide in her bedroom and lock the door while they called the police.

An Apple Mac laptop, an HP laptop, two mobile phones and jewellery worth around £2,000 were taken and subsequently recovered.

The court heard that, apart from Honc, all the other defendants have long criminal records in their home country, with 32 convictions between them.

Pawlowicz has also been convicted in the UK for a raft of offences including sexual assault and affray.

Speaking outside court, Mr Kohler said: "I feel vindicated by the sentence but I don't want to be vindictive about it.

"I take no pleasure in their deservedly long sentence - and it is a long sentence, and that's right and proper.

"It will be difficult for them, as it should be, but I'm not going to sit here and jump up and down looking delighted about it.

"I still feel some anger, I hope I don't feel bitter. I hope in time that will pass.

"It depends what they do with their lives after this sentence whether or not my anger eventually subsides."

Asked if he had got the answers he was looking for on why he was targeted, he said: "What they said didn't really make sense, they said different things.

"I've been told something by the police in confidence which confirms my view they got the wrong address.

"I'm sure that's what it was, I've always thought that and now I'm pretty convinced that was so."


Mr Kohler said that he would have "slight" double vision for the rest of his life and his wife still gets flashbacks.

"My daughter is still traumatised by it, as you saw in court today she burst into tears when they were being sentenced," he added.

"But those things will pass, the family is strong and the family learns from the good and the ill that happens to it."

His daughter Eloise said that seeing the men sentenced had made her feel "sad".

"I had never seen them before today and I am sad that is the way their lives turned out," she said.

"I hope they will use the time to think about changing their lives but I don't bear a grudge against them."

Detective Inspector Daniel O'Sullivan, who led the investigation, said that all four perpetrators had "pivotal roles throughout", making it difficult to identify the ringleader.

He said: "This was a horrific attack on Paul and his family. The defendants have shown little remorse throughout this two day sentence and throughout the whole investigation.

"Their motivation was purely one of financial greed, all four defendants were fuelled by drugs and alcohol, and I'm pleased with the sentence today, it should give closure to the family."