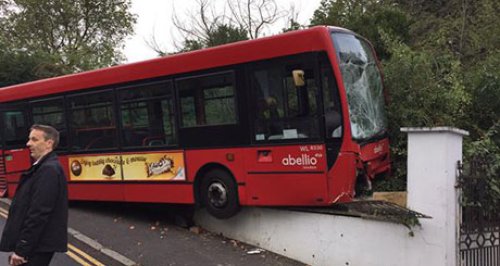 Five passengers have managed to escape unhurt after a bus crashed into a row of houses in Lewisham.

The single decker bus came to a halt with its front wheels in the air after becoming wedged on top of a garden wall on Tuesday 18 August 2015.

Emergency services attended the crash in Vicars Hill in Lewisham shortly before 6.30am and helped the driver and his five passengers off the precariously positioned bus.

No injuries were reported, police said.

Mike Weston, Transport for London's director of buses, said: "At around 6.30am this morning, a route 484 single deck bus, operated by Abellio, collided with a wall on Vicars Hill near to the junction with Ladywell Road.

"There will be a full investigation into the incident."

The 484 was travelling between Camberwell Green and Lewisham when it crashed.

A Metropolitan Police spokeswoman said it was a "damage only" collision.