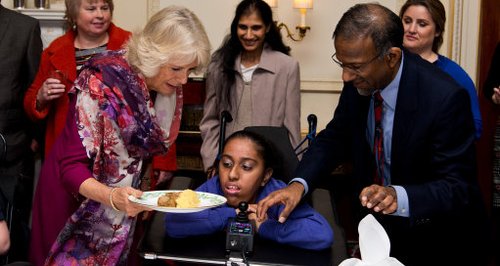 The Duchess of Cornwall's served up sausage and mash at a tea party in London for terminally ill children.

Camilla refused to stand on ceremony as she rolled up her sleeves and handed round plates to youngsters from the Helen & Douglas House children's hospice who were visiting her official London home, Clarence House.

Each year the Duchess invites 12 young people and their families from the home, of which she has been patron since 2007, to come in and help her decorate the royal Christmas tree.

Helen & Douglas House is a hospice in Oxford that cares for terminally ill children, young adults and their families.

It provides medical, emotional and practical support, helping families deal with the implications of living with a child who will die prematurely, so that they can make the most of their time together.

Opened in 1982, it was the world's first children's hospice and cares for children from birth to 16.

Sporting a fuchsia dress and matching patterned scarf, Camilla chatted to each of the children and their families about their often heartbreaking stories.

Among them were Andrew and Kay Lyon from Oxford and their daughter Sienna, three, who suffers from a rare genetic condition that affects her brain.

The couple told the Duchess of the unparalleled support the charity had given them, even looking after Sienna, who suffers from regular seizures and is unable to walk or talk, in order to take their two eldest children on holiday.

"Helen House has been remarkable and the care they give Sienna just unparalleled," Mrs Lyon said.

"It is something we never expected, and has opened up a whole new life for us. We don't know how long we will have Sienna with us, so this is about helping us to create some very happy and special memories.

"Today has been huge part of that."

The Duchess then opened the doors to her drawing room, behind which her assistant equerry from the Welsh Guards, Captain Fred Lloyd George, was waiting. Resplendent in his uniform, he saluted the children.

Camilla then helped them to choose several decorations each and carefully placed them on the twinkling tree.

Afterwards it was time for tea and sausages and mash, as well as chocolate Christmas trees and decorated biscuits.

Camilla told the gathering: "It's lovely to see you all and I hope you have enjoyed yourselves. This is one of my favourite things to do each year and seeing your faces as the door opens is magical.

"Helen & Douglas House is a wonderful, uplifting place. Everyone should visit it."

Camilla also comforted Marie McVicar from Wiltshire, who lost her son Ollie Samways, seven, as a result of complication from pre-existing brain damage on November 1. Ollie's sister Shayla, four, put his decoration on the tree instead.

Marie, who is pregnant with a baby boy due in February, said: "Ollie sadly died at the hospice from a chest infection last month and I would do anything to support them. They have become my family.

"Ollie was a very special little boy and met the Duchess when she visited the hospice earlier this year. She remembered him immediately and was a huge comfort."

"It's such a unique day, so special," she said. "It makes the children feel so worthy and special and important.

"It's a real privilege to have the Duchess as our patron. She takes such an interest in the work we do and her patronage helps to shine a light on children's palliative care."