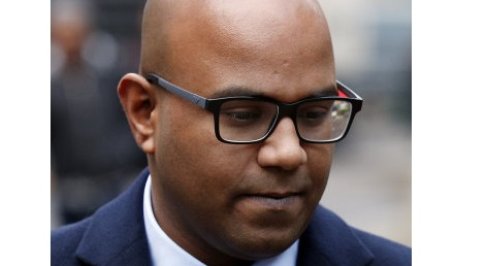 An NHS doctor says he is "extremely relieved" after being cleared of female genital mutilation in a landmark case branded a "show trial" by critics.

Dhanuson Dharmasena, 32, smiled while his family sobbed and hugged each other as he was cleared by a jury in less than 30 minutes.

It had been claimed he illegally stitched a young mother back up after she gave birth - re-doing the FGM she had as a six-year-old in Somalia.

But his defence barrister Zoe Johnson QC said Dharmasena had been "hung out to dry and made a scapegoat" for hospital failings.

His speedy acquittal at London's Southwark Crown Court will prompt questions about why the Crown Prosecution Service (CPS) chose such a marginal case for the UK's first prosecution.

Hasan Mohamed, 41, was cleared of abetting the offence.

In a statement after the verdicts, Dr Dharmasena said: "I am extremely relieved with the court's verdict and I am grateful to the jury for their careful consideration of the facts.

"I have always maintained that FGM is an abhorrent practice that has no medical justification; however I cannot comment further on the details of this case due to patient confidentiality.

"I would like to thank my family, friends, legal team and all those who supported me through this difficult time and I look forward to putting this matter behind me."

Mr Mohamed's lawyer, Ali Hussain, branded the case a "show trial". He said: "Following today's verdict, I am delighted that my client has been acquitted.

"He should not have been prosecuted and the jury's verdict confirms what he has always said - that he did nothing wrong.

"My client has suffered months of stress and the humiliation and lost precious time with his two young children.

"My client strongly believes this case was nothing more than a show trial - an effort by the CPS to regain some confidence after failing to bring a prosecution despite FGM laws being in place since 1985.

"My client hopes the CPS will properly review cases in future so that innocent people do not suffer as he and his family have suffered."

The "barbaric" practice of FGM has come under the spotlight in recent years, with Hollywood star and UN Special Envoy Angelina Jolie joining the international fight against it.

Also known as female circumcision, it involves the removal or injuring of part of a woman's genitals for non-medical reasons. It is highly dangerous and can be fatal.

But, as the prosecutor Kate Bex made clear in her opening, the landmark case was a far cry from the stereotype of the "back street clinic" cutter.

Jurors heard Dr Dharmasena and his wife, also a doctor, had to put their "lives on hold" and deferred having a baby and moving home because of the trial.

And some questioned why the woman, known only as AB, was thrust into the media spotlight the case brought with it when she did not want it.

The woman herself was taken to a police station early in the morning and had her fingerprints taken.

The two-week trial heard the woman was rushed to the Whittington Hospital in north London on November 24 2012.

But hospital trust failings meant she had not been placed on the FGM pathway as she should have been.

Instead Dr Dharmasena, then a junior registrar, faced the "nightmarish scenario" of discovering she was circumcised as she went into emergency labour.

The well spoken doctor from Ilford, Essex, cut the woman open to deliver the baby, and then partially re-stitched her afterwards because she was "oozing" blood.

He insisted he only carried out a single figure of eight stitch, which he thought was in her medical interests. He was later told by superiors he should have sutured her on either side.

But Dr Dharmasena had never treated a woman with FGM before or received any training in it.

Ms Johnson said the case had its root cause in serious and systematic failings at the hospital, but the blame was pinned on the young doctor.

And key medical notes had been torn out of a book and gone missing.

She told the court: "We do suggest that Dr Dharmasena has been hung out to dry and made a scapegoat for the Whittington Hospital and their failings."

She said the hospital was guilty of "serious, systematic failings, none of which are Dr Dharmasena's fault".

"Yet he is the one paying the ultimate price for the hospital's ineptitude."

She added: "You may think this case an unusual case for the prosecution to bring as their very first example.

"Everyone accepts, not least Dr Dharmasena, that female genital mutilation is an abhorrent practice.

"But female genital mutilation is not going to be stopped in this country by labelling Dr Dharmasena a criminal and a mutilator of women."

Speaking on the court steps Mr Hussain added that Mr Mohamed's friends and family in the Somali community "are against FGM".

Asked if he thought the prosecution case was brought because of political pressure, he said: "It may well have been. I'm not in a position to say one way or another."

The Royal College of Obstetricians and Gynaecologists (RCOG) welcomed the verdict. In a statement it said: "This case highlights the complex issues around the care of female survivors of FGM and the resource implications for NHS services, including early identification and referral, better record-keeping and information-sharing between healthcare professionals.

"It demonstrates the difficulties and pressures that trainee doctors face in busy labour wards in the immediate postpartum period. It is vitally important for all clinicians to ensure that they are aware of the law and of the relevant guidance from their professional bodies in fulfilling their roles and responsibilities."

Tanya Barron, CEO of Plan UK, which campaigns against FGM, said: "Today's verdict is a reminder that the global battle to end female genital mutilation will be long, often slow and rarely straightforward.

"We mustn't be deterred in our mission to continue to combat the practice and show it for what it is - a human rights violation. But our aim - to end this practice everywhere - will never be achieved by prosecution of its perpetrators alone.

"We must prevent the practice from occurring in the first place and that means tackling causes, not just enforcing laws. That requires long-term work with communities to ensure that mothers, fathers and community leaders are aware of the grave risks of the practice and that girls themselves know their rights.

"Crucially, it means working globally to end FGM everywhere - not just in this country. As long as the practice exists worldwide, girls in the UK will remain at risk."

Health Secretary Jeremy Hunt said the case was an encouraging sign that more action was being taken to eliminate the "barbaric practice" but that NHS staff needed to do more to expose the scale of the issue.

"It is a very, very serious problem and we need to do much better in the NHS," he told LBC radio.

"I don't want to comment on this particular case but I think what is encouraging is that things are starting to happen on FGM.

"Frankly no-one knows the exact numbers but it is a totally barbaric practice and we have to do everything we can to stamp it out.

"We will only find out (how many cases there are) if we create a culture of openness where NHS professionals realise that they have a duty to speak out if they think they have come across someone who is at risk of FGM.

"If they don't do that then we are failing in our duty of care to that individual.

He said he would make sure every NHS doctor, nurse and midwife "knows their duty".

Janet Convery, a spokeswoman for ActionAid, who works on the front line of fighting FGM across Africa, said: "The trial may have ended in the UK, but it doesn't end for the 140 million girls and women worldwide who have been subjected to female genital mutilation.

"That's more than double the UK population. ActionAid supports the global fight to end female mutilation. The impacts of FGM violate the rights of girls and women. It can cause severe bleeding, infection, infertility and even death."

The CPS defended its decision to bring the prosecutions amid accusations it had been a "show trial".

Alison Saunders, the Director of Public Prosecutions, said: "It was right that we put this case before the court and on three separate occasions, once before trial and twice during the trial, the judge dismissed applications by the defence to stop the case, thereby agreeing that the evidence should be considered by a jury.

"The CPS does not choose which cases it is asked to consider for prosecution and we must apply the same test to every case.

"We do not shy away from difficult cases, and where there is sufficient evidence and it is in the public interest we will prosecute.

"The evidence in this case meant a prosecution should be brought so that a jury could be allowed to consider the facts. We respect the decision of the jury.

"This will, of course, not affect our resolve to bring those who do commit FGM to justice where we have the evidence to do so.

"Female genital mutilation is an invidious crime, and one which we remain determined to prosecute.

"Today's verdict will not stop the important work that we and the police are doing in encouraging victims to come forward and looking at new ways to help bring cases to court."