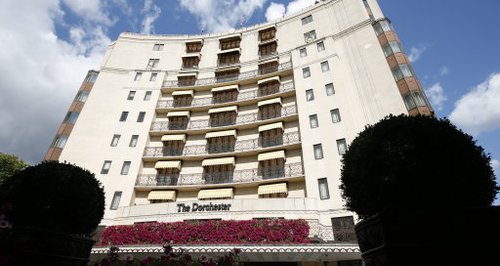 Police are investigating the "unexplained" death of a man at London's Dorchester Hotel.

Officers were called to the five-star venue in Mayfair on the evening of Friday 1 May 2015 following reports that a man was unresponsive in one of the rooms.

Ambulance crews arrived but the man in his 40s - reportedly an Arab tourist - was pronounced dead at the scene.

Two men who were arrested in connection with the death have been bailed to a date in June, Scotland Yard said.

The Dorchester describes itself as "one of the world's most iconic hotels" and a favourite choice of celebrities, world leaders and royalty.

Last year it was targeted twice in smash and grab raids by moped-riding gangs, who broke into display cabinets and stole watches and jewellery.

A Scotland Yard spokesman said: "Police were called to a central London hotel, at approximately 5.30pm on Friday May 1, to reports of an unresponsive man in one of the rooms.

"London Ambulance Service was also called. The man, in his 40s, was pronounced dead at the scene.

"The death is being treated as unexplained at this stage.

"Officers from Westminster are investigating. Two men were arrested in connection with the incident. Both have been bailed pending further inquiries until a date in June."

A spokeswoman for the Dorchester Hotel said: "With regret we can confirm the death of a guest at the hotel on Friday May 1.

"We are unable to provide any further details at this time as the matter is in the hands of the police. Our thoughts are with the family and friends of the deceased."

The man's next of kin have been informed of his death.

A post-mortem was carried out to discover how he died but the results were inconclusive.

The coroner has ordered further toxicology tests which may take eight weeks.