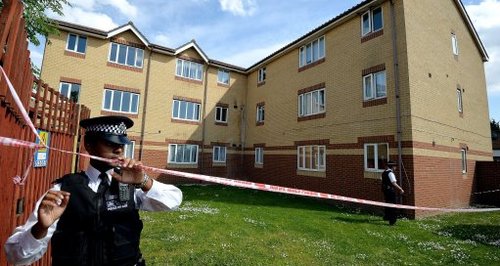 A police investigation's been started after a family of four were found dead in east London.

Police attended a house in Grove Road in Chadwell Heath, east London, on Tuesday 12 May 2015 and found the bodies of a 37-year-old woman and her twin daughters, aged 13.

Their father, 44, who was missing from the address, was found dead at Woodford Reservoir in Walthamstow, north east London, at 8.17am on Wednesday 13 May.

Police said they first attended the property on Monday evening after concerns were raised about the welfare of the residents.

But they did not force their way in until 1.10pm on Tuesday because there was no initial response or sign of disturbance.

The matter was referred to the Independent Police Complaints Commission yesterday and the Met's directorate of professional standards is reviewing the police response.

Post-mortem examinations are expected to start today but police said the bodies of the females had no signs of visible injuries.

Formal identification has not taken place and next of kin have not been informed.

The last confirmed sighting of the family - who are originally from Kerala state in India - was on Sunday, Scotland Yard said.

Detective Superintendent Kenny McDonald, who is overseeing the investigation, said: "At this stage we are awaiting the outcome of the post-mortems to confirm cause of death, which will provide further evidence of what has taken place inside the house at Grove Road.

"However, at this stage in our ongoing investigation, we are not looking for anyone else in connection with the deaths.

"We are making extensive inquiries to trace next of kin, who we believe to be outside of the UK."

Juniper Court, the block of flats where the family lived, was cordoned off with police tape.

Mother-of-two Zoya Habibani, 24, lives in the same block and described the family as "really friendly".

Bobby Singh, 41, manager at the garage beside the block of flats, said he would see the twins going to school in the mornings.

He described them as "very reserved" and "polite" and said they have lived in the block for a couple of years.

But he added that he did not see their father very much.

"The kids always walked in front of their mother. The mother was always a couple of steps behind," he said.

Mr Singh said he asked one of the police officers what had happened and he said as soon as they mentioned twins he knew it was them as there are not many twins in the area.

"I hope someone finds out the answers," he said. "I hope they rest in peace as well."

Desmond Moreira, who works for Rynew Property which looks after the communal areas on the estate, said police told him they would be at the scene around the clock.

He said the flats in the block are mainly one- and two-bedroom homes.