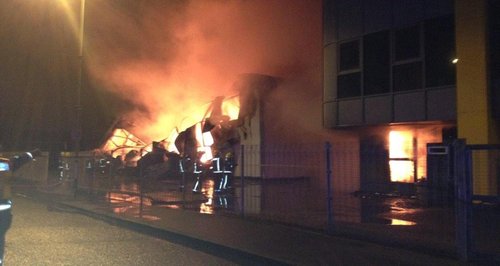 A storage warehouse in south east London has been completely destroyed by a fire that caused loud explosions to be heard nearby.

Almost a hundred firefighters and 15 fire engines were called to tackle the fire in the early hours of Saturday 21 February 2015.

Two other units and three lorries were also damaged by the fire, which sparked more than 50 emergency calls to the fire brigade from concerned members of the public in south-east London.

London Fire Brigade said they brought the blaze under control over the course of more than three hours, and were able to stop it spreading to homes near the scene at Yarnton Way in Erith.

"The blaze was in an industrial area and we managed to stop it spreading to any residential homes.

"We are likely to be at the scene throughout the morning damping down pockets of fire."

The force said the cause of the fire, which broke out around 2am, was not yet known.