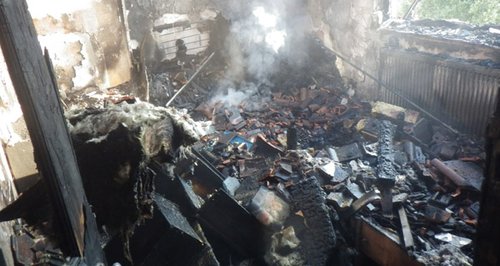 A house fire in Twickenham in which a dog died is being blamed on the sun's rays being refracted by a glass jar full of loom bands.

The fire started when low winter sunlight was refracted by a Nutella container used to collect loom bands on a window sill.

It is thought the rays were magnified and beamed onto blinds, causing them to catch fire.

Declan Murphy, who lived at the wrecked house in Twickenham, south-west London, said he was out celebrating his anniversary with wife Lindsay and their two children at the time of the blaze on 15 February 2015.

The family's Jack Russell Chilli was trapped inside and died, while a first floor bedroom was destroyed and the roof was damaged in the fire on February 2015.

The jar believed to have sparked the fire was on the window sill in his daughter's bedroom.

He told Get West London they were "heartbroken" at the death of the dog, adding: "We've been told it will be up to a year before the house is ready for us to move back into."

The electrical supervisor, 41, added: "I want to ensure other people are aware of the dangers and know to keep glass items away from windows and out of direct sunlight so they don't have to go through anything like this."

"It's worth spending five minutes checking that your window ledges are clear of any glass or crystal that might lead to a potentially life changing blaze."

Last week lingerie tycoon Michelle Mone told how a fire broke out at her home in similar circumstances.

She wrote on Twitter: "OMG sun coming through the window, bean bag next to mirror table...bean bag has just gone on fire. Incredible how a house fire can start."

Ms Mone put the fire out herself and firefighters did not attend.

LFB said sun rays have caused 125 fires in the last five years and warned they are a risk in the winter as well as the summer.

Mr Pugsley said the figures show that these sorts of incidents are "not an urban myth".