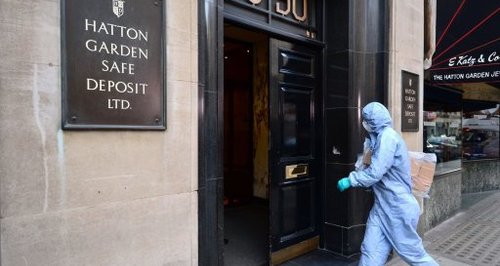 A ninth man has appeared in court charged over the Hatton Garden jewellery heist at Easter.

Taxi driver John Harbinson, 42, was remanded in custody at London's Westminster Magistrates' Court on Friday 22 May 2015 - a day after eight men accused of conspiring to carry out the raid appeared at the same court.

The father-of-three, of Beresford Gardens in Benfleet, Essex, will next appear with the other eight defendants at Southwark Crown Court on 4 June 2015.

Wearing a dark blue sweatshirt and grey jogging bottoms, Harbinson stared straight ahead as he was remanded in custody by District Judge Quentin Purdy.

It was revealed yesterday that the losses from the raid at the Hatton Garden Safe Deposit Company in London's jewellery quarter run to in "excess of £10 million".

Yesterday, eight men charged in connection with the break-in over the Easter weekend were remanded in custody.

Also in court were Brian Reader, 76, and Paul Reader, 50, both of Dartford Road, Dartford, Kent, and Carl Wood, 58, of Elderbeck Close, Cheshunt, Hertfordshire, who face the same charge of conspiracy to burgle between April 1 and May 19.

They arrived at the court in a convoy of police vans, escorted by armed officers, and spoke only to confirm their names, addresses and dates of birth.

Another man, arrested on May 19, has been bailed pending further inquiries.

Prosecutor Edmund Hall said that while the total value of the goods stolen was not yet known, it ran to "in excess of £10 million" and 73 safety deposit boxes had been looted.

Officers believe thieves got into the building, which houses a number of businesses, through a communal entrance before disabling the lift so they could climb down the shaft to the basement.

Once inside, the thieves ransacked dozens of safety deposit boxes, taking millions of pounds-worth of items.

After facing criticism for the way the incident was handled, the Metropolitan Police apologised for not following procedures when receiving a call from a security firm about an intruder alert at the premises at midnight on Good Friday.

But Flying Squad detectives rejected the suggestion that they were bungling "Keystone Cops".