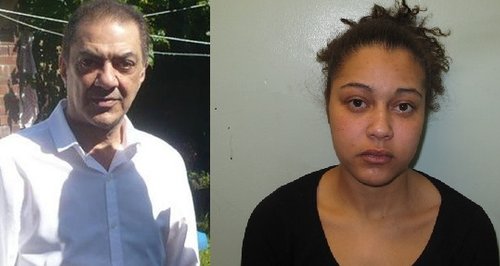 A woman who set a 'honey trap' that led to a professional gambler being murdered in Islington for his winnings has been jailed for 16 years.

Following a trial at the Old Bailey, she was found guilty of Mr Hassan's manslaughter and false imprisonment, having earlier admitted a plot to rob him.

Her boyfriend Kyrron Jackson, 28, and his friend Nicholas Chandler, 29, repeatedly kicked and stamped on Mr Hassan after Granger let them into his home. Afterwards, they left him with multiple broken bones, lying face down in his bedroom drowning in his own blood.

The pair were found guilty of his murder and were today jailed for life with a minimum term of 36 years.

Sentencing, Judge William Kennedy described the attack as "pitiless and wicked", adding: "It was quite simply an act of brutality which defies reason and comprehension."

In mitigation, Orlando Pownall QC said Granger had worked with the elderly since she was 18 and had only got involved with the plot because she was in love with Jackson and "fell in with his desires".

Mr Pownall said she now "deeply regretted" what had happened, adding: "Her head was turned by Mr Jackson who she loved and to some extent by Mr Chandler who was persuasive and superficially charming."

But jailing her, the judge said she had been "deceitful from the outset" and had "lost her sense and compassion" when she got involved in the scheme.

He added that she clearly cared more for Jackson than he cared for her.

The trial had heard how Mr Hassan was oblivious of the sting as he wined and dined the woman he knew as Rachel, even bragging to his friends that he was not paying her to be with him.

After their first date, Granger, of Gillingham, Kent, was overheard by a taxi driver reporting back that Hassan was "flashy" and saying: "This guy is a professional gambler. He has never worked a day in his life."

On the night of the murder, Mr Hassan had taken Granger to the top Mayfair restaurant Nobu before going on to the Palm Beach Casino nearby, where he gave her £1,000 in cash to gamble with.

Dressed in a strapless top, tight-fitting black trousers, high heels and a large gold necklace, Granger was spotted by a poker supervisor kissing Mr Hassan "passionately" and she told the pair to "get a room".

Later, he took her back to his Islington flat where she made her excuses and left in a taxi - but not before letting in her boyfriend Jackson and his friend Chandler, who were poised to strike outside.

Using parcel tape, the two men tied up Mr Hassan in his bedroom then kicked him to death and ransacked his home as they searched for his stash of cash.

While Mr Hassan's beaten and bloody body lay undiscovered, the killers were filmed on Granger's mobile phone throwing wads of £50 notes around.

Granger's "soft target" was known to have two favourite casinos in Mayfair - the Playboy Casino on Old Park Lane and the Palm Beach Casino in Berkeley Street.

He sometimes won as much as £15,000 at a time and rather than using bank accounts, he would keep his winnings around his flat, even keeping thousands of pounds in his microwave.

The fact the divorced father-of-three "enjoyed the company of women" made him particularly "vulnerable to the unscrupulous", prosecutor Crispin Aylett QC told jurors.

He said Mr Hassan's death was the "culmination of the ruthless greed" of Jackson and Chandler who had been involved in two armed robberies at the same casino in South Kensington in January and February last year, but with limited success.

The jury was shown CCTV film of the dramatic raids as well as clips of Granger and Mr Hassan together in the casino hours before the killing.

They were also played a short clip of the three defendants literally throwing the victim's money around hours after the murder, with Jackson wearing a gas mask and stuffing a fist full of notes into his underpants.

On the film, Judge Kennedy told the three defendants: "The eloquence with which it speaks about you is deafening."

All three were convicted of robbing Mr Hassan and conspiracy to falsely imprison him.

Jail sentences totalling 99 years each for those offences were all ordered to run concurrently with the minimum life term.

More defendants were also jailed for their involvement in the earlier robbery on the Grosvenor Casino and a second foiled robbery plot on the same place.

Damien Edwards, 22, and Steven Gibson, 30, both of south east London, had earlier pleaded guilty to various offences relating to both incidents and were jailed for 15 years and 14 years and three months respectively.

A 17-year-old youth who admitted his part in the second robbery plot was jailed for seven and a half years.

The court heard Granger only had previous convictions for drink driving and making off without paying for a taxi.

But Jackson was previously convicted of cultivating cannabis and was jailed for eight months for his involvement in the London riots.

Chandler had been convicted of having counterfeit currency and was in breach of the suspended 10 month sentence at the time of the murder.