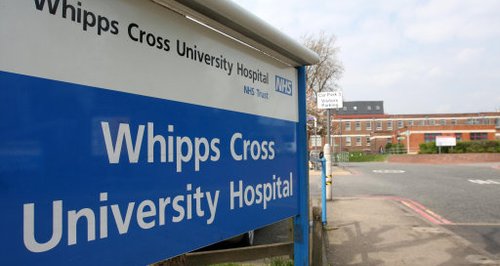 The trust that runs east London's Whipps Cross University Hospital has been placed in special measures over worries there are not enough staff to provide adequate care.

The Care Quality Commission (CQC) have rated the already under-fire hospital in Leytonstone as inadequate in a report after sending in inspectors last November following concerns being raised by a number of sources, including patients.

The CQC said it also found a "culture of bullying and harassment" at the hospital - run by Barts Health NHS Trust - and staff did not want to speak with the inspection team for fear of repercussions.

Two healthcare assistants were jailed in August 2013 for abusing elderly female patients on the hospital's geriatric ward, while a third received a suspended sentence for ill-treatment or neglect following a Metropolitan Police inquiry sparked by a student nurse who acted as a whistleblower.

That same month the trust was issued with three formal warnings by the CQC after inspectors found "unsafe" conditions at the hospital including filthy maternity wards and water placed out of the reach of elderly patients.

Chief inspector of hospitals, Professor Sir Mike Richards, said today that many of the failings found on a further inspection in November 2013 had still not been resolved.

The latest report found a reorganisation of staffing in 2013 had a damaging impact and staff were overstretched, while there was an atmosphere which did not help in recruiting or retaining permanent staff.

Some agency staff had not been trained properly in their roles and the average bed occupancy was so high that it was affecting the flow of patients through the hospital, with patients admitted to wards which were not appropriate to their needs.

Patients were cared for in recovery areas whilst others were transferred out of critical care beds before they were ready to.

The hospital also persistently failed to meet the national waiting time targets, with some patients experiencing delays of more than 18 weeks from referral to treatment.

Those nearing the end of their life were not identified and their needs were therefore not always assessed, while operations were often cancelled due to a lack of available beds.

Morale was low and the CQC said a previous staff survey for the trust as a whole found work related stress to be 44%, the joint highest rate in the country for an acute trust, while 32% recommend it as a place to work - the third lowest in the country.

"Overall, we rated this hospital as 'inadequate'," the report concluded.

"We found urgent and emergency care, medical care (including care for older people), surgery, services for children and young people, outpatients and diagnostic imaging and services for those patients requiring end of life care were inadequate. Significant improvements are required in these core services.

"We found that maternity and gynaecology and critical care require improvement.

"We rated this hospital as inadequate for safe, effective, responsive and well-led, and rated caring as requires improvement."

The trust was £13.3 million off its financial plan at the end of September 2014, with it forecast to be £64.1 million in deficit by the year's end.

Inspectors spent six days at Whipps Cross in November, visiting the hospital unannounced twice and identifying 15 areas where the trust must make improvements.

Since the inspection the CQC has issued four warning notices requiring the trust to improve the care and welfare of patients, its system for assessing and monitoring services, staffing levels, and handling of complaints.

Sir Mike said: "Our inspection of Whipps Cross University Hospital has highlighted a number of serious concerns surrounding poor leadership, a culture of bullying, and low staffing which has led to risks to patient safety.

"There is a large section of the population in East London who depend on this hospital and they are entitled to services which provide safe, effective, compassionate and high quality care.

"Barts Health NHS Trust has not given sufficient priority to safety."

The trust's chief executive, Peter Morris, said: "The special measures regime is designed to aid service improvement by providing help and support where it is most needed. It has worked well with NHS organisations in other parts of the country and I am confident it will work here.

"Barts Health is committed to ensuring the safety and welfare of every one of its patients. This report describes services that fall a long way short of what we aspire to. We are very sorry for the failings identified by the CQC in some of our services at Whipps Cross and we know the trust has a big challenge ahead."

Shadow health secretary Andy Burnham said: "This report is another warning for David Cameron that under-staffed hospitals are putting patients at risk on his watch.

"Across England, more than half of nurses now say their ward is dangerously understaffed, and more believe patient safety has got worse than better. The vast majority of NHS staff say the Government's reorganisation is harming patient care.

"The truth is that by wasting £3 billion on a damaging reorganisation and causing a crisis in A&E, David Cameron is making care problems more likely, not less."