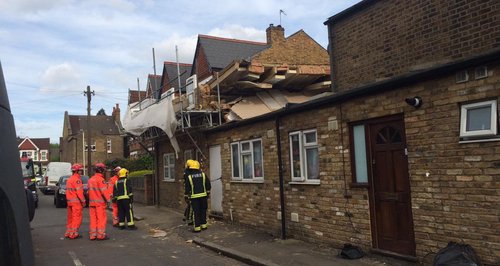 A man's been rescued by fire crews after part of a house being built collapsed in Ealing.

Crews from the London Fire Brigade said the entire second floor fell through to the first floor just after 3pm on Monday 11 May 2015.

The man - and another - had to be treated by paramedics.

The Brigade’s Urban Search And Rescue (USAR) crews, like those that recently travelled to Nepal, were at the scene searching the building for any casualties.

Station Manager Chris Frewin who was at the scene said: “The USAR team have rescued a man who was trapped and he is being treated by the London Ambulance Service. Another man has also been treated for minor injuries.”

Fire engines from Southall and Ealing fire stations and fire rescue units from Battersea and Croydon fire stations were at the scene.