Kensington MP To Stand Down 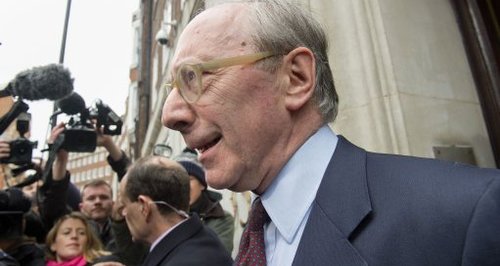 The man who has been MP for Kensington for 10 years says he is going to step down over cash-for-access allegations.

Sir Malcolm Rifkind has admitted he "may have made errors of judgment" but insisted he has done nothing wrong in the cash-for-access controversy.

The former foreign secretary said it was "quite obvious" allegations made following an undercover sting had "become an issue".

Sir Malcolm said he had also stepped aside as chair of the parliamentary Intelligence and Security Committee (ISC) because he did not want the work of the committee to be "distracted".

Speaking to reporters after a meeting of the ISC, he said: "I don't think I did anything wrong. I may have made errors of judgment, but that's a different matter."

Sir Malcolm, who has had the Tory whip withdrawn, dismissed suggestions that he had been pushed by No 10.

He said: "Downing Street don't have that power. The intelligence committee acts under an Act of Parliament. The Prime Minister has no power to dismiss members of the committee.

"The committee make their own decisions. I reflected on the decision last night. I could see that the issue was obviously an issue which was arousing public interest. "

Prime Minister David Cameron is not believed to have spoken to Sir Malcolm in the last 24 hours.

He added: "I attach a great deal of importance to the work of the committee. It is quite obvious, whether fairly or unfairly, that this had become an issue and therefore it's sensible."

Sir Malcolm said he was standing down as an MP in Kensington because "there is very major uncertainty" around his position.

Sir Malcolm and Labour former foreign secretary Jack Straw, who was also caught up in the probe, have referred themselves to the Westminster standards watchdog over the expose - but insist they broke no Commons rules.

Mr Straw, who announced he was standing down as an MP long before the current furore, has suspended himself from the Labour Party while he fights to clear his name.

Kathryn Hudson, Parliamentary Commissioner for Standards, warned that any investigation would take until after the general election to complete, pointing out that in similar previous inquiries it had taken up to five weeks to get hold of full transcripts from broadcasters.

Former Lib Dem leader Sir Menzies said: "As someone who has served alongside Malcolm Rifkind, I have no hesitation in saying that he has been an outstanding chairman of the Intelligence and Security Committee.

"Many of the recent reforms to the committee, which have led to it having greater powers, are directly the result of his personal analysis of what was required to increase the accountability of the intelligence services.

"He has done the right thing in resigning, but the House of Commons will be the worse for the absence of his perceptive and always well-informed contributions to discussions on foreign affairs."

Sir Malcolm, who first entered Parliament in 1974 and served for more than a decade in the cabinets of Margaret Thatcher and John Major, has dismissed allegations of wrongdoing as "unfounded" and vowed to fight them "with all my strength".

It came after he suggested - in comments to undercover reporters from Channel 4's Dispatches and the Daily Telegraph - that he could arrange "useful access" to every British ambassador in the world because of his status.

Mr Straw has denied wrongdoing after the Telegraph claimed he was taking a job with a firm that won a £75 million government contract after he privately lobbied a minister on its behalf.

Labour leader Ed Miliband seized on the row to call on Mr Cameron to join him in banning MPs from taking directorships and consultancies.

Labour MPs and prospective parliamentary candidates have already been warned that the party's rulebook will be changed to stop them holding such posts after the May general election - a commitment that will be in the Labour manifesto.

Mr Miliband also revealed that he was consulting on legislation to put the ban into law for all MPs and to impose a cap on outside income similar to that in place for members of Congress in the US, who may earn no more than the equivalent of 15% of a minister of state's salary on top of their pay as politicians.

The party will force a Commons debate and vote on the issue tomorrow.

"We need to act to improve the reputation of our Parliament in the eyes of the British people," a source said.

The Prime Minister's official spokesman said Mr Cameron "respects and supports" Sir Malcolm's decision to quit both the Commons and the ISC chair.

"What the Prime Minister thinks is that there were very serious allegations and questions that had been raised," he told reporters.

"Because of that he thinks that Sir Malcolm has done the right thing, which is why he respects and supports his decisions."

Ukip leader Nigel Farage said MPs "should not and must not" act as lobbyists, but he defended their right to have a second job,

He said: "MPs may have existing business interests or new income streams that don't conflict with their duties as MPs. Any conflict of interest must be declared before any debate or vote.

"MPs should not and must not act as lobbyists for any commercial interests whatsoever."

Mr Farage said despite the concerns raised about the situation in Westminster it was "nothing compared to what I have seen in Brussels, where over 75% of our commercial law is made".

Speaking to the Sky News Stand Up Be Counted campaign, Commons speaker John Bercow said the two MPs would "cop it" if it was proven they broke the rules.

He said: "They are both highly intelligent, highly capable, highly experienced people. It may well be that errors of judgment have been made.

"If that is so, then they will cop it, they will face the music, they will suffer a penalty as a result.

"My attitude is people should be in Parliament to represent their constituents and to stand up for principles and policies dear to them.

"People should not be in Parliament to add to their personal fortune."

The ISC said it had decided not to appoint a replacement chair until after the general election as it had already completed its last inquiry of the session - into privacy and security following the revelations by US-whistleblower Edward Snowden into mass snooping operations.

"At the meeting, the committee completed its major inquiry into privacy and security, and its report will now be sent to the Prime Minister," a spokesman said.

"Given that that concludes the substantive work of the committee in this parliament, and that the committee has no further formal meetings scheduled before the prorogation of Parliament, the committee decided that there was therefore no need for it to elect a new chairman for the remaining few weeks.

"All further matters which arise during the life of this parliament will be dealt with by the committee as a whole."