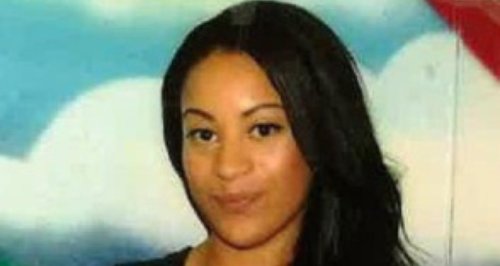 Three men are facing years behind bars for shooting dead a nursery teacher who was out celebrating her birthday in Kilburn.

Sabrina Moss (pictured) and her friend Sabrina Gachette were gunned down in the street in August 2013 by two hooded men armed with a machine gun and a shot gun.

Miss Moss was shot in the heart and died later in hospital. Miss Gachette was hit in the back by more than 50 gunshot pellets and was lucky to survive.

Jurors was told they were not the intended targets and were just in the wrong place at the wrong time, sheltering from the rain with a group of about 15 others outside a fast food restaurant in north west London.

Drug dealers Hassan Hussain, Yasin James and Martell Warren were convicted of Miss Moss's murder and the attempted murder of Miss Gachette after a 10-week trial at the Old Bailey.

Miss Moss's mother Andrea Chalmers wept as the verdicts were delivered after more than 25 hours of deliberations. The men will be sentenced on 12 September 2014.

Jurors were told Miss Moss, who had recently moved into a new flat in Neasden with her partner and their four-year-old son, had taken the day of Friday August 23 off work to get ready for her birthday party, meeting friends at home.

That evening they went to the Love & Liquor nightclub in Kilburn High Road, north west London, and throughout the night others joined their group.

Meanwhile, Warren, Hussain and James planned the shooting carefully, carrying out surveillance on their targets before launching their attack an hour before dawn outside the Woody Grill.

In an interview with the Press Association, Miss Gachette, 25, said: "There was no warning. I thought someone had thrown a brick at me. Then because of the explosion I thought it was a firework.

"Sabrina was in front of me and that was when I heard her say she had been shot in her heart. That is the last thing I remember hearing her say.

"You hear of stabbings, gangland murders - you don't expect people to do things like this when there are innocent people around.

"It's scary to think that you are just out minding your own business and someone can creep up behind you and do something like that. They didn't know you and you know for sure you don't know them."

The women were thrown together with the intended targets of the shooting - members of the South Kilburn Gang - because it was raining on the night of the shooting and they had taken shelter under a shop awning by the Woody Grill.

The gunmen - Hassan Hussain and Yasin James - could not have failed to spot the young women in their party clothes amid the rest of the group dressed in casual streetwear, the court heard.

Dressed in a bright red dress and high heels, Miss Moss would have stood out from the crowd like a beacon in the night, the Old Bailey was told.

Regardless, Hussain discharged the Mac 10 "spray and pray" machine gun six times and James fired both barrels of the shotgun at near point blank range before fleeing in a car driven by Warren.

Although the exact reason for the shooting was unclear, it was connected to a drug-dealing turf war and deep-seated animosity with members of the South Kilburn Gang.

And they were found guilty, along with a fourth defendant - Simon Baptiste, 29, from Cricklewood - of conspiracy to cause grievous bodily harm between August 22 and August 25 last year.

The court heard that Warren was a convicted drug dealer and member of the Kensal Green Boys or Bloods, known as the KGB.

There was heavy security in court when he gave evidence in the witness box and implicated Hussain and James in the shooting but denied his own involvement, saying he was just there to do a drug deal.

In turn, Hussain and James said Warren was a "dirty lying scumbag" who had only named them to protect the real killers.

The jury was told that the Mac10 machine gun which killed Miss Moss had been used before in the West Midlands and in London in 2009, 2012, and January last year at the Poolcrest Snooker Club in Kilburn High Road.

Although there was no suggestion that Hussain carried out those shootings, police said the gang he was affiliated with had control of the gun.

Reading a statement, Mr Chalmers, who is originally from Glasgow, said: "She was a beautiful, loving and caring person. She had a larger than life character the fullness of which cannot be summarised in one statement. It would take an age to describe all the ways we have been affected and what we miss about her. We miss everything about her and who she was. She was an important key piece of our family, she is simply irreplaceable.

"As much as we are pleased that these individuals will be behind bars for a long time, it doesn't alter the fact that Sabrina is gone and her son has been left without a mother. Sabrina was a completely innocent victim of a totally senseless and callous crime and even though this chapter is now closing in our lives, we will never be the same and our lives have been forever been affected."

Miss Gachette said: "I, Sabrina Gachette, am elated to stand before you knowing that justice has been served.

"The past 12 months have been a living hell for myself and my family. The effects of this heinous crime is difficult to put into words.

"No one could have anticipated that a celebratory night out would end in such a tragic way. It has been extremely difficult for me to come to terms with what has happened. Knowing that I was inches from death has been hard enough, but having to accept that I will never get one of my closest friends back; is painful to comprehend.

"The August Bank holiday will never be the same for me, it was a weekend I used to look forward to with Sabrina's birthday, carnival and also my younger sister's birthday. However, it is now marred by the thoughtless, cowardly acts of the three men whose names I daren't say.

"Today marks the beginning of the end of what has been a tiring and terribly traumatic 12 months. The, physical, mental and emotional impact has been huge. These men will never truly understand the depths of which they have changed my life, but I have found it in my heart to forgive them. Without doing so, I would not be able to move forward. Thank you."

Detective Chief Inspector Andy Partridge said:  "This was a callous act, committed by three individuals who were willing to fire a MAC 10 and a double barrelled shotgun indiscriminately at a group of people outside a busy restaurant.

"They waited until a large group of people were together and then fired at their victims. It is clear they wanted to injure, maim or even murder as many of those people as possible, without any consideration as to who was within that group.

"Both Sabrina Moss and Sabrina Gachette were the innocents caught up in something they had no knowledge of and no involvement in."

And London Chief Crown Prosecutor Baljit Ubhey said: "These defendants were targeting members of a rival gang and spent the hours leading up to the fatal shooting in surveillance of their targets. But when it came to firing shots, they didn't care who they hit."

Earlier, there were ugly scenes outside court as relatives of the defendants loudly protested their innocence before being led away by police officers.