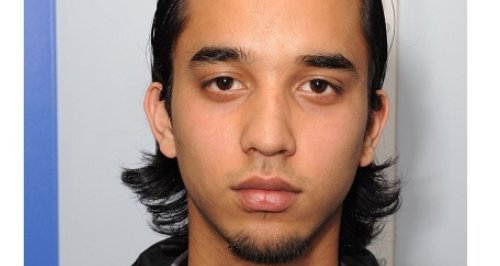 A teenager from east London has been found guilty of trying to groom a young man with learning difficulties to carry out a Lee Rigby copycat killing.

Kazi Islam, 18, who worked for a board game company, tried to persuade 19-year-old Harry Thomas to buy the ingredients for a pipe bomb and to attack one or more soldiers with a kitchen knife or meat cleaver on his command.

He encouraged the older youth to start calling himself Haroon and tried to radicalise him with stories of innocent children murdered by military forces.

But Islam's schemes were unwittingly sabotaged by Mr Thomas who failed to buy any of the right ingredients for a bomb and let slip to "a few friends" what they were up to.

A series of exchanges on BlackBerry Messenger and social media sites were uncovered when police raided the house in east London where Islam lived with his family.

In November 2013, Islam had messaged Mr Thomas: "Did u get the ingredients mate?"

Thomas replies that he got "some pipes" but during the course of the conversation it appeared that he got the wrong ones.

Later that month, Islam tried to disguise the plot with code words when he told Mr Thomas: "So we need to work on this cake."

But Mr Thomas, failing to grasp the subtlety, responds: "cake? U mean the b o m b."

Islam ordered Mr Thomas not to talk to anyone after the older youth admitted he had "only told a few mates", the court heard.

The defendant told him: "Don't tell anyone ... just keep your mouth shut ... The brothers are gonna come after me and kill me and they're gonna kill u as well."

At the time he was arrested, Islam, who failed to pass any GCSEs, was living with his parents and working for Winning Moves based in Paddington which sells a range of popular family board games including Top Trumps, Monopoly, Cluedo, Risk, Connect 4, Pass The Pigs.

Islam, of Meanley Road, Newham, east London, denied engaging in the preparation of terrorist acts, saying that he only talked to Mr Thomas about getting the ingredients for a bomb as an "experiment" in radicalisation.

The practising Muslim said he first became interested in issues surrounding Afghanistan and Iraq because he wanted to find out why Fusilier Rigby had been attacked outside his Woolwich barracks in May 2013.

For "research purposes" he attended meetings and talks held by the banned extremist group al Muhajiroun, viewed Jihadist propaganda online and even downloaded a document entitled How to Make Semtex, he said.

He said he had met Mr Thomas on an IT course at Barking and Dagenham College and decided to befriend him in October 2013.

His experiment with Mr Thomas was inspired by Nicky Reilly - another Asperger's syndrome sufferer like Mr Thomas - who had been involved in a failed suicide bombing in Exeter.

After Islam was arrested, police searched Mr Thomas's home but found nothing to suggest he had in fact bought any of the items on his friend's terror shopping list.

Islam was convicted by a majority of 10 to two and the jury deliberated for more than 14 hours.

He will be sentenced on May 29.

Islam made no reaction as the guilty verdict was read out by the foreman of the jury.

As he was remanded in custody to await sentence, judge Richard Marks warned that a custodial sentence was "inevitable".

Following the conviction, Commander Richard Walton, head of the Met's Counter Terrorism Command (SO15), said: "Islam groomed and bullied a vulnerable man to try and get him to make a bomb or attack soldiers.

"We were able to intervene early on this occasion and prevent what we believe would have been an act of terrorism in the UK.

"We continue to appeal to anyone who may have knowledge of people with similar intentions. The earliest we can intervene to prevent terrorism the better.

"We also remind the public that there is currently a need to protect vulnerable or impressionable adults or children from this brand of Islamic extremism."