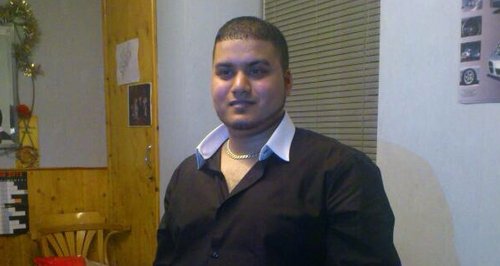 Police investigating the murder of a man at an east London minicab office are trying to find a man wearing a Sherlock Holmes-style hat.

Scotland Yard said detectives are looking for a man seen wearing a deerstalker hat and acting suspiciously shortly before Mohammed Yasser Afzal was stabbed in the neck.

Mr Afzal, 22, (pictured) of Forest Gate in east London, was attacked while working as a dispatcher at E20 Cars in Broadway, Stratford at around 8pm on Monday 24 March 2014.

Detective Chief Inspector John Sandlin, from the Metropolitan Police's homicide and major crime command, said the man they are seeking was seen outside the cab office before the attack.

He is believed to have gone inside and then run off towards nearby Chant Street.

Mr Sandlin said: "We know the man was carrying a JD Sports drawstring plastic bag and was wearing a distinctive deerstalker type hat which has flaps covering his ears.

"I would urge anyone who may have seen him running towards Chant Street or nearby to call the incident room as soon as possible."

He said detectives also want to speak to anyone who was at a bus stop outside the office or anyone on buses to Bow or Stratford Station which may have stopped there.

Mr Afzal was taken to an east London hospital by ambulance after the attack but he died last night, the Metropolitan Police said.

His next of kin have been informed and a post-mortem examination is due to take place.