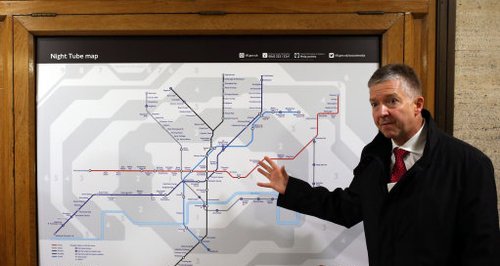 Tube managers have announced there will be a train roughly every 10 minutes when five lines start running through the night at weekends.

London Underground have released an official map ahead of introducing the first all night Tube services on September 12.

The map was announced as LU faces a strike next month by Tube drivers over pay and conditions for the all night Tube.

The RMT and TSSA unions are balloting their members for industrial action, with the results due at the end of the month.

Gareth Powell, London Underground's director of strategy and service development, said: "The introduction of the Night Tube is a historic step in our modernisation of the Underground.

"The Night Tube map shows our customers exactly when and where they can use this landmark service, which will make their late night journeys quicker and easier than ever before. As well making life easier for people, the Night Tube will also boost London's night-time economy - supporting thousands of jobs and stimulating hundreds of millions of pounds in economic growth."

Mick Cash, general secretary of the RMT said: "Instead of hyping up route maps and publicity stunts, Transport for London should be addressing the staffing, pay and safety issues at the heart of the current dispute over night running on London Underground. That should be their priority."

::  Night Tubes will run on Friday nights and the early hours of Saturday and Sunday mornings on:

::  Central line: trains will run between Ealing Broadway and Hainault;

::  Jubilee line: trains will run on the entire line;

::  Northern line: trains will run on the entire line except on the Mill Hill East and Bank branches;

::  Victoria line: trains will run on the entire line.

Finn Brennan, Aself's district organiser for the Tube, said: 'It's easy enough to produce a map, but if London Underground management want to have an all night service in September, then they need to sit down and negotiate a fair deal for the staff they expect to provide it.

"Last week train drivers on London Underground voted by a record 97% to strike over London Underground's refusal to negotiate on new rosters that would mean they could have to work an unlimited number of weekend and night shifts for no extra pay.

"Aslef aren't opposed to all night services, but they have to be introduced in a way that is fair and protects the work life balance of the hard working staff who have delivered the improved service that Underground management boast of."