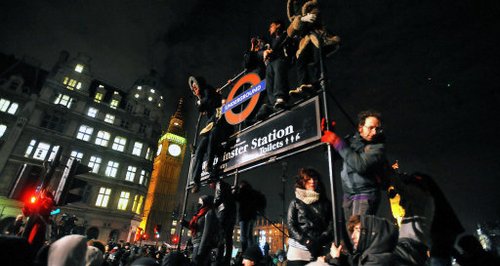 A Met Police officer who knocked a man's tooth out with his riot shield during student protests in London in 2010 has been jailed for eight months.

Pc Andrew Ott, 36, struck Royal Holloway student William Horner as he tried to break free from a kettled area on Parliament Square in 2010.

Ott was found guilty of one count of assault occasioning actual bodily harm, but cleared of perverting the course of justice.

Ott sobbed in the dock as he was sentenced to eight months in prison.

Judge Jeffrey Pegden told Ott he had carried out "gratuitous and unnecessary violence" and abused his power as a police officer.

The judge told Ott: "This offence was committed in a sterile area, in relative darkness, when you had the victim cornered and no violence was necessary at all.

"An extremely serious aggravating factor is your abuse of power as a police officer.

"You hit him with a full force blow to his face with your shield.

"That was wholly gratuitous, unnecessary violence, and I have considered the stress on William Horner over the last few years."

Ott wiped his eyes with a tissue while in the dock, and a woman in the public gallery broke down in tears after the sentence was passed.

Ott's colleagues, Pc Calvin Lindsay and Pc Thomas Barnes, were both cleared yesterday of perverting the course of justice.

Jurors heard that Ott was taped on his personal recording device threatening violence towards the crowds that had gathered near the Houses of Parliament and talking about "getting" the protesters.

The assault happened after Ott, of Rochester, Kent, chased Mr Horner as he tried to scale a fence and was captured on the audio device the police officer had on his uniform.

The violent protests saw riot police pelted with missiles, including rocks and concrete blocks, and statues in Parliament Square were daubed with graffiti.

No further action was taken against Mr Horner, who was 20 at the time of the attack.


Judge Pegden said he had "absolutely no doubt" that policing the protests on December 9 2010 was "frightening, stressful and exhausting".

But Mr Horner, who was not in court for the sentencing, "simply wanted to go home" and had not committed an offence when he was attacked, the judge added.

In mitigation, Kevin Baumber said his client had been diagnosed with depression and suffered from severe stress.

"Your honour may feel think on that day he was pushed into losing his normally sound judgment in what was a long, tiring and terrifying day," Mr Baumber said. "It was a day that was traumatic. It was a trauma that still lives with him."

Ott, who has served as a police officer since 2003, faced the "double jeopardy" of criminal proceedings and disciplinary action and was in danger of losing a career "that is dear to him", he added.

An investigation by the Independent Police Complaints Commission found all three officers have a case to answer for gross misconduct and they will face disciplinary hearings by the Metropolitan Police Service.

Deputy Assistant Commissioner Fiona Taylor, of the Met Police's directorate of professionalism, said: "We are naturally disappointed that an MPS officer has been convicted of an assault.

"His behaviour clearly fell well below the high standards we expect of our officers, even in challenging circumstances such as the violent disorder in which this incident occurred, and it is right that he was held to account in the criminal courts.

"His case and that of the other two officers involved will now be subject to the misconduct process. Until this is completed it would be inappropriate for us to comment further."