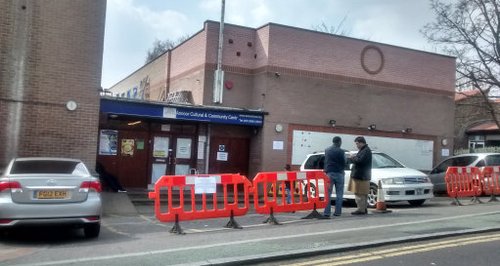 The son of a Syrian-born preacher shot in a parked car in Wembley say they are helping police solve the crime.

The An Noor mosque in Acton, where Abdul-Hadi Arwani served as iman from 2005-2011

Abdul-Hadi Arwani, a critic of the regime of President Assad, was found with gunshot wounds to the chest just after 11am on Tuesday 7 April 2015. He was declared dead just over half an hour later.

Counter-terrorism detectives have taken over responsibility for the investigation into the death of the father of six.

The Met Police said it was keen to speak to anyone who may have seen Mr Arwani or his car, a dark coloured Volkswagen Passat, on Sunday April 5 or Tuesday April 7.

Detectives from the Counter Terrorism Command (SO15) have discovered that Mr Arwani, 48, had driven near to where his body was found on the morning of Sunday, April 5, and parked up in Havenwood where he remained for a short while.

The investigation into the death remains in its early stages and police are "open-minded" about the motive, Scotland Yard said.

In an appeal for information, Mr Arwani's son Morhaf, 20, said: "The police are currently investigating this brutal murder. As an individual, a family and a community, we are helping the police to solve this heinous crime.

"To members of the public that knew my late father and even those of you who didn't know him, please tell us what you know. We know that it won't bring our father back to us but it may help to deliver justice to those who killed him."

He is thought to have fled Syria as a teenager after surviving the Hama massacre in 1982 and has been described as an outspoken critic of President Bashar Assad's regime.

He is believed to have attended protests against the regime outside the Syrian embassy in London in 2012.

A post-mortem examination found the cause of death to be gunshot wounds. An inquest was due to be opened and adjourned at Barnet Coroners Court.