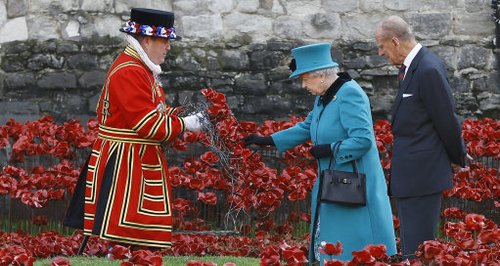 The Queen's been to visit the sea of poppies being planted at the Tower of London to commemorate the British servicepersonnel who died in WW1.

Surrounded by a sea of red ceramic poppies in the former moat of the Tower of London, the Queen laid a wreath in tribute to those who paid the ultimate sacrifice.

Blood Swept Lands and Seas of Red was created by ceramic artist Paul Cummins and by Armistice Day on 11 November 2014 there will be 888,246 ceramic poppies planted, one for each British and Colonial death during the conflict which began 100 years ago.

Mr Cummins, who met the Queen and the Duke of Edinburgh during their visit to the Tower said: "I was inspired to create this installation after reading a living will by an unknown soldier who we think may have been from Derby.

"I approached the Tower as the ideal setting as its strong military links seemed to resonate.

"The installation is transient, I found this poignant and reflective of human life, like those who lost their lives during the First World War. I wanted to find a fitting way to remember them."

Stage designer Tom Piper helped Mr Cummins make his vision a reality along with a team of 8,000 volunteers who installed the flowers.

When the Queen and Duke first arrived at the imposing Tower of London they were met by its Constable, General the Lord Dannatt, the former head of the British Army, and Colonel Richard Harrold, Governor of the medieval fortress.

In an ancient ceremony they surrendered their ceremonial keys of office to the Queen and she symbolically touched the objects.

The Queen and Duke walked through a path in the poppies to a small mound where Yeoman Warder Jim Duncan was holding the royal wreath.

The Queen touched it and it was carefully placed on a small mound by the Yeoman Warder.

Hundreds of spectators lined the perimeter of the moat watching the solemn event and kept a respectful silence.

He added: "She was very keen to know the numbers involved. It's captured the imagination of the whole nation so I think it's wonderful we've had the Queen at one end and also completely ordinary people at the other coming. It's got completely across society."

Later the royal couple were driven into the Tower complex in their state limousine while being escorted by a Yeoman body made up of more than 20 men.

The car travelled at walking pace along Water Lane, past traitors' gate and around William the Conquerer's White Tower to the Chapel Royal of St Peter Ad Vincula where the Queen and Philip were greeted by the Rev Canon Roger Hall, the chapel's Chaplain, and the Bishop of London the Right Reverend Richard Chartres.

The royal couple attended a private service of thanksgiving to mark a project to restore and conserve the chapel.

After the service the Queen and Duke visited the Tudor chapel's refurbished undercroft and the memorial to Sir Thomas More - a former Lord Chancellor executed for refusing to recognise Henry VIII's divorce from Catherine of Aragon.