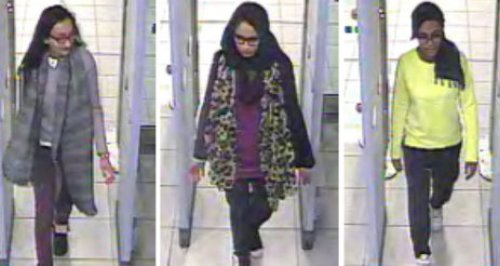 The families of two east London schoolgirls who fled to Syria to join the Islamic State group say they have lost hope the teenagers will return after discovering they have been married off to militants.

The families have confirmed that two of girls have since contacted them to reveal their marriages to what the teenagers called "approved" IS men.

Tasnime Akunjee, a solicitor representing the families, said they were grieving over the news that they had been dreading.

He told the Guardian: "It has caused a lot of distress. It entrenches their lives in Syria, rather than in Britain. It erodes significantly hopes that they will come back."

The schoolgirls told their families that they have been separated and are living apart in and around Raqqa, Syria - an Isis stronghold.

The two schoolgirls, who the families do not want to identify, married the older men in their 20s in a ceremony approved by Isis authorities after reportedly picking their husbands from a catalogue of suitors.

The schoolgirls are believed to have followed another 15-year-old girl who travelled to Syria in December after becoming radicalised.

The news emerged after a video was released online which reportedly showed the three girls walking around Raqqa and carrying automatic rifles.

But Mr Akunjee said it was unlikely to be the girls.

"At the time the video was shot, two of the girls are known to be married and separated from their friends from east London," he told the Guardian.

Members of their girls' families, who appeared before a committee of MPs in March, claimed they were normal teenagers who watched shows including Keeping Up With The Kardashians.

Concerns about how Turkish authorities dealt with the disappearances were later raised by their families.

The Metropolitan Police believe around 600 Britons have travelled to Syria and Iraq since the conflict began, and around half are believed to have returned to the UK.