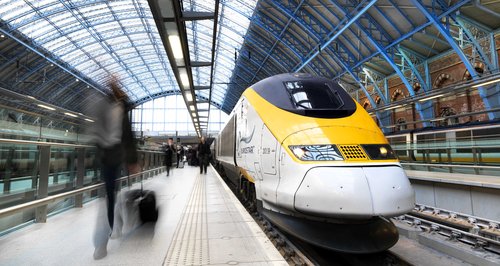 The incident, which took place at London St Pancras on the evening of Wednesday 18 February 2015, the day after fans from the same football club allegedly pushed a black man off a Paris Metro while shouting a racist chant.

An investigation is currently under way after a member of the public reported the men, who had travelled by train from Paris Gard du Nord, to British Transport Police.

It is believed they were returning home after attending the Champions League one-all draw against Paris St Germain on Tuesday.

Superintendent Gill Murray, of British Transport Police, said: "The racist chanting was reported by a member of the public who was disgusted by the behaviour of the men who had travelled on the 6.40pm service from Paris Gard du Nord.

"The men shouted as they walked through the station having alighted from the train a short time earlier.

"If you travelled on the train from Paris or were at the station and have information which can assist our investigation I would urge you to get in touch as a matter of urgency.

Ms Murray continued: "It's clear that unfortunately there is still a minority who think it is acceptable to behave in such an abhorrent manner. There is more that needs to be done to publicly condemn this type of behaviour and British Transport Police is actively working with football clubs, the football authorities and other key agencies to tackle this appalling behaviour."

The news comes as police revealed they are seeking three more Chelsea football fans they believe were involved in Tuesday's allegedly racist incident on the Paris Metro train.

Five people have so far been suspended from the club's Stamford Bridge ground following investigations into the incident.

Images have been released in a bid to identify the trio, who the Metropolitan Police think were among a group of Chelsea supporters who pushed a black man off the train and chanted a racist song while on the way to the Champions League match.

The club has reiterated its promise to ban for life anyone proved to have been involved in the altercation and is helping police in the UK and Paris.

It comes as the man pushed off the train, identified only as 33-year-old Souleymane, said in a radio interview the incident is the club's "responsibility".

Chelsea have said they are "appalled" and apologised to the victim, while manager Jose Mourinho said he was "ashamed" of the fans involved.

The club said it has also invited him and his family to London to attend the second leg of the European clash against PSG on 11 March.