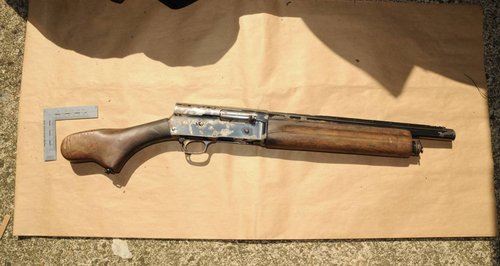 Three people from London have been jailed for a total of 43 years for drugs offences.

Detective Inspector Keely Smith, from the Projects Team, said: "This case has prevented six firearms from reaching the streets of London and having potentially lethal outcomes.

"I believe Arogundade was looking to sell the weapons on to those who would be willing to use them.

"This investigation highlights the work my team is doing on a day-to-day basis to keep the community safe."

On 7 May 2013 Douglas was arrested in possession of a kilo of cocaine during a stop on a vehicle in Friern Barnet Road, N11.

Following a search of her address large quantities of cutting agent were found.

Arogundade was arrested on 27 May 2013 in Eastwick Row, Hemel Hempstead after officers stopped a car he was travelling in and discovered six firearms in the boot - including a handgun, a shortened pump action shotgun and a sawn-off shotgun together with ammunition.

Further inquiries by police linked the drugs to Arogundade and Jones-Lartey, who was later arrested in November 2013.

All three were subsequently charged. Arogundade and Jones-Lartey were convicted of their offences on 2 March 2015 following a five-week trial at the Old Bailey.

Douglas had pleaded guilty to conspiracy to supply a controlled drug on 26 November 2013.

Bianca Willoughby, who had been charged after being arrested at the scene with Arogundade, was later acquitted at court, being found not guilty of possession of firearms.