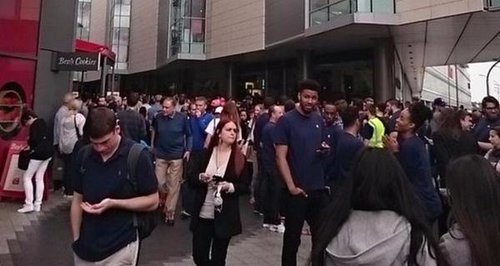 Westfield in Shepherd's Bush had to be evacuated after an unexploded Second World War bomb was found nearby.

Shoppers were told they had to leave the shopping mall after the bomb was found at a building site.

One witness tweeted that it was "mayhem" after "thousands of people" were told to get out.

Other buildings in the area were emptied and BBC workers at Television Centre were also affected.

"Centre House and Television Centre are within the police cordon and we are awaiting further advice from police as to whether those buildings may need to be evacuated," an internal email stated.

Police set up an exclusion zone after the wartime shell was unearthed at a building site in Ariel Way at around 10.40am.

A Metropolitan Police spokesman said: "A cordon and a wider exclusion zone of 400 metres have been implemented as a precaution, whilst we deal with the incident.

"We await the arrival of specialist officers who will assess ordnance.

"A number of premises close to the building site have been evacuated as a precaution and we continue to assess whether there is need to extend the current cordon which is in place."

"Local road closures and diversions are in place and pedestrians and motorists are advised to avoid the area," the Met spokesman added.

"There are serious disruptions to public transport; commuters are advised to check before they travel."