Uni of Herts: More To Come From 25 Year-Old Web

The World Wide Web is 25 years-old today - and was created by Sir Tim Berners-Lee - but - it nearly didn't happen.

Whilst working at the CERN lab in Switzerland, Berners-Lee was working on a way to easily access computer files from one another.

But when he presented his ideas to his peers on this day in 1989 it was so ground-breaking, so unexpected by everyone else it was quickly being dismissed by much of the computer and scientific industry.

The ARPANET - the US military began studying the idea of linking computers on networks back in the 1950s and by 1969 had created a stable early version of the internet called "Arpanet". This was purely for military information systems, and only for the US military at that.

By the mid to late 1980s, rival systems to the Web were being proposed, America's "CompuServe" and "Gopher" and from France "Minitel". Crucially, both involved the user having to pay to use it. Berners-Lee's "web", would be free to use.

Sir Tim went on to write the the HyperText Transfer Protocol (HTTP), HyperText Markup Language (HTML), and the first ever web browser, WorldWideWeb. 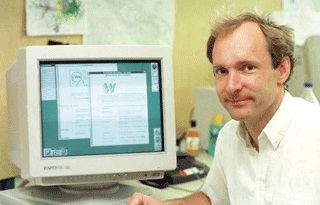 Ironically, it was the US vice president Al Gore who pushed the Web overcome the rival paid-for systems by getting the US Goverment to use the web - a massive push was the introduction of Whitehouse.gov.

The first widely-public use of WWW was in 1993.

But now in 2014, around 60% of the world's population is still not connected - the use of smartphones in the developing world is set to change that rapidly.

Speaking to Phys.Org, Marc Weber, creator and curator of the Internet history program at the Computer History Museum in Silicon Valley said: "The Web is really only half built; it is not worldwide yet."

A big battle for the shape of the Web could be the effect of billions more people getting online with smartphones in developing parts of the world.

From various sources inc. Phys.Org, Webfoundation and w3.org; here's a timeline of the development of the Web:

Dr. Jyoti Choudrie, reader of Information Systems at the University of Hertfordshire told Heart: "What we experience now with the web is not how it will be in the future, there is so much more to come.

It's not just about the speed of accessing the web. There is a lot more to be discovered, this is NOT the end of things. Wearable technology like Google Glasses, Smart Watches - all these are showing us new potentials for technology (to use the web), it's very exciting."

As well as the force for good - inevitably with any new invention, there will always be the possibility for crime. Along with using the web for criminals to share information and increasing levels of cyber-bullying, society is grappling with how to deal with these issues.

Today (March 12), the think-tank Parliament Street has released data provided by 25 police forces in England and Wales relating to reported crimes "which in some way relate to Twitter and Facebook." The figures for Herts, Northants and Thames Valley forces are included below: