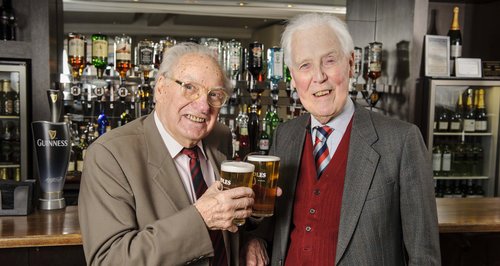 They say it's better late than never.

War hero Fred Harris has finally had the pint he was promised after saving an officer's life - in 1944!

Sir Hugh Beach was wounded on a battlefield in La Bassee in northern France when Harris managed to put him in an armoured car and get him to safety.

He would go on to become a general, and has been knighted by Her Majesty Queen Elizabeth II.

When Sir Hugh realised a member of a battlefield tour he was on was Harris' son Michael, he arranged a reunion at Victory Services Club in London.

It was the first time the two men had met in over 70 years.

Fred Harris, age 21 (left) and a letter from Harris to Lt Beach's father, wishing his son well after saving his life on a recon mission in France in 1944 (right). Picture: LNP

"I said, 'I had to call you Sir back then and I still do now by the looks of it'," says Harris. "But he told me to call him Hugh. It was emotional for both of us."

Now 91, Harris has been married to his wife Patricia for 63 years.