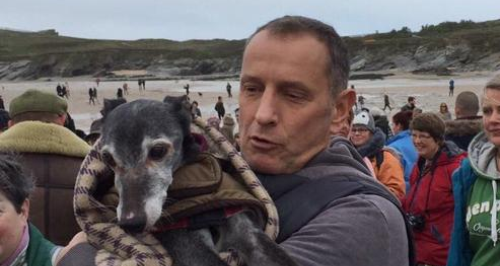 Calling all dog lovers, prepare to hear a tale that will revive your faith in human nature.

When owner Mark Woods decided that his sick pooch finally needed to be put out of his misery, he wanted to give him one last treat before he said his final goodbyes.

However, Mr Woods wasn't the only one who wanted to wish the beloved hound well and give him one final send off.

After posting the tragic news on his Facebook, the dog lover was bowled over when the whole community came out to support him in this emotional time.

It was a seriously special moment for Mr Woods and his beloved Whippet, as they shared their final moment together alongside so many friends and their dogs:

The Porth beach in Newquay came alive with supporters, who popped along to accompany the two, with people taking pictures and even filming the special event:

As he reached the ocean, Mr Woods dipped Walnut's paws into the sea one last time, before taking him to the vet and having him put down:

The last paddle on #walkwithwalnutpic.twitter.com/tPyhBoEjiB

Mr Woods ended his sweet message with a heartfelt thanks to everyone who joined him and walnut on their final journey together: "God bless you all."