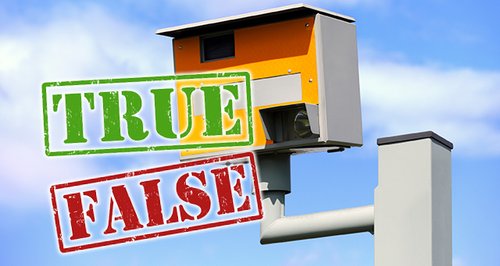 Motoring charity Brake has taken a look at these 12 motoring rumours to clear up the truth once and for all. Never fall for those driving falsehoods again!

It's no secret that drivers from up and down the UK sometimes take a chance and push the speed limit when driving, whether it's getting the kids to school on time or making the last train.

And it's been 25 years since the first speed camera was installed to keep us in check.

If you rely on the rumour mill to tell you what cameras are switched off then that's not okay. It's not safe to rely on hearsay so Brake charity are here to set things straight.

Read more: Avoid The MOT Trap If You Do THIS One Thing!

Not all speed cameras work, some are switched off: TRUE

A spokesman for Brake said: "Concerningly, various Freedom of Information requests have revealed that some speed cameras are not fully operational in the UK.

"Brake fully supports the use of speed cameras, and would encourage the return to use of any cameras that have been turned off. Speed cameras are proven to reduce speeding, and can catch far higher numbers of speeding drivers than traffic police with mobile cameras."

You have to be speeding at least 10% of the limit plus 2mph, to get caught: FALSE, sort of

The law states that a driver can receive a speeding ticket as soon as they exceed the speed limit on a road, even if that is only by 1mph.

However, guidance provided by the NPCC (National Police Chiefs Council, formally ACPO, Association of Chief Police Officers), suggests that officers do not seek prosecution of a driver until they have exceeded the speed limit by 10%, plus 2mph.

The spokesman for Brake said: "It is important to note this guidance is not legally entrenched, and that officers have the discretion to act outside it – drivers should be aware that this guidance also does not mean that they can break the speed limit legally."

If you slow down for the camera then speed up again, you won’t get caught - Depends on the camera

"The operation of average speed cameras prevents dangerous driving in this manner, and provides a strong deterrent to drivers who may not be detected by fixed cameras," according to the spokesman for Brake.

He added: "Breaking the speed limit is incredibly dangerous, and drivers should ensure that they stick to speed limits, and drive to the conditions of the road, at all times."

If you drive really fast, you won’t trigger the camera: FALSE

This one’s complete rubbish. The only way to avoid triggering the camera is the stick within the speed limit.

Speed cameras must be painted yellow to be legal: FALSE

The government has announced plans for all speed cameras in England to be painted yellow, however if you’re caught on a grey camera before that happens, the offence is still valid.

They are particularly beneficial as they enforce limits over a longer stretch of road, preventing law-breaking drivers from being able to speed up again immediately after passing a camera."

Read more: Can We Guess Which Colour Car You Drive In Just 10 Questions?

You must be notified within a certain amount of time for it to be valid: TRUE

According to Brake, a driver who is caught by a speed camera, rather than a police officer, must be sent a Notice of Intended Prosecution (NIP) within 14 days. The notice will go to the individual who the vehicle is registered to.

You can request a speed awareness course: FALSE

Those eligible for a course will be notified by the police. If you haven’t been offered one, you’re out of luck.

You can do a speed awareness course more than once: Sometimes true

Drivers who are caught speeding for a second time may be able to do a second course, dependent on the severity of the offence. However, this cannot be within three years of the first speed awareness course, according to guidelines.

If you get a speed awareness course, you don’t have to declare it on your insurance: FALSE

You can even get caught on a bicycle or horse: FALSE

"Whilst it is unlikely that a cyclist, or other road user on non-motorised transport, would be able to reach the necessary speeds to be above the limit, the law holds that legislation around speed limits covers only motor or mechanically propelled vehicles," said the spokesman for Brake.

"However," he added, "It is important that cyclists, like all road users, follow the laws of the road and travel safely and responsibly for conditions."

Speed cameras are just there to make money: FALSE

The spokesman for Brake said: "Speed cameras exist to save lives, and protect road users. Breaking the speed limit, or travelling too fast for conditions, is a contributory factor in more than one in four crashes in the UK, and at higher speeds, crashes are far more likely to be fatal.

"Evidence shows that speed cameras provide a vital deterrent to dangerous and selfish drivers, although it is important that they are accompanied by sufficient levels of police on our roads to act as a visual deterrent."

Remember, speed cameras are there for a reason so the best way to avoid being caught out is to obey the speed limit!