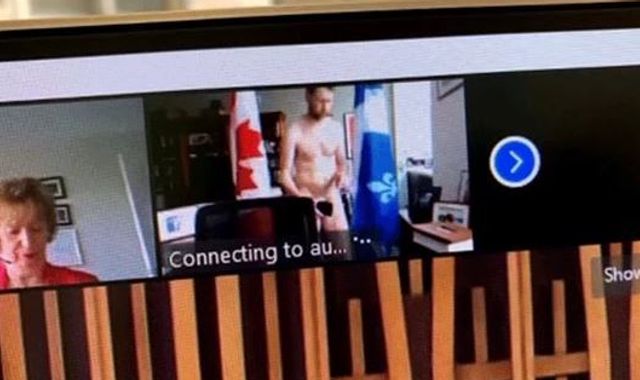 A Canadian MP has apologised to colleagues after appearing completely starkers during a virtual meeting of the House of Commons.

William Amos, who has represented the Quebec district of Pontiac since 2015 for the Liberal Party, is seen behind a desk between the Quebec and Canadian flags, with what appears to be a mobile phone preserving his modesty.

A screenshot of Mr Amos's disrobed display was obtained by news agency The Canadian Press - it was originally visible only to parliament members and staffers on an internal video conference feed.

In an email statement apologising for his bare-faced cheek, Mr Amos described his state of undress as "an unfortunate error".

"My video was accidentally turned on as I was changing into my work clothes after going for a jog.

"I sincerely apologise to my colleagues in the House of Commons for this unintentional distraction. Obviously, it was an honest mistake and it won't happen again."

Raising a point of order, Claude DeBellefeuille, an MP for the opposition Bloc Quebecois party, suggested that parliamentary decorum requires male parliament members to wear a jacket and tie - and a shirt, underwear and trousers.

Speaker Anthony Rota has reminded MPs to always be vigilant when they are near a camera and microphone.