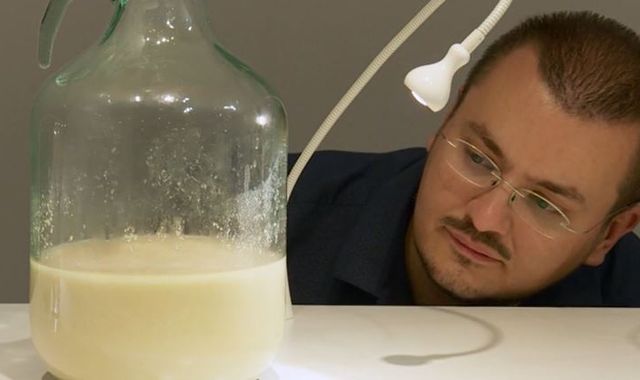 A museum dedicated to stomach-churning food has added equally off-putting alcoholic drinks to its displays, including wine fermented in a prison toilet.

The Disgusting Food Museum in Malmo, Sweden, said it wanted people to examine their relationship with booze by seeing the extreme lengths others will go to while craving a mind-altering brew.

There is a spit-fermented cornmeal beer from Peru, a Ugandan gin made from fermented bananas, and an ancient Korean beverage fermented from children's faeces and rice, which was thought to be medicinal in the past.

There is also a strong Scottish brew served from the mouth of a taxidermied squirrel, and an Icelandic beer made with a whale testicle smoked in sheep dung.

Museum director Andreas Ahrens said people can be "very desperate to get drunk".

He added: "So whenever we find ourselves in a situation where there is no alcohol, we get quite inventive and we've been doing this for millennia."

While many of the drinks on display are commonly consumed somewhere in the world, they may be considered challenging by outsiders.

They include bitters such as Gammel Dansk, which is drunk in Denmark, and Fernet-Branca, an Italian amaro (herbal liqueur).

"So much of what we drink is an acquired taste," Mr Ahrens said.

Food items at the museum, which opened two years ago, include bull testicles, maggot-infested cheese, frog smoothies from Peru and a wine made of baby mice that is consumed in China.

One display tells the story of what happened in the Soviet Union when the government closed alcohol stores to reduce drunkenness - many people died after drinking perfumes and varnish.

Pondering strange drinking habits when alcohol is scarce, Mr Ahrens said: "Some of these things are so normal in some societies. Should it really be that normal?

"Why don't we listen to our brains and go, 'Hey, if this tastes this way, maybe we shouldn't drink it?'"