'Big potato' statue cut down by vandals in village in Cyprus 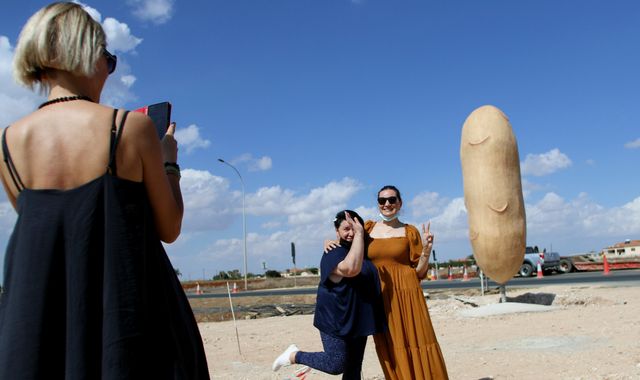 Police in Cyprus are investigating after a statue of a giant potato was found vandalised on New Year's Day.

The four-metre sculpture in the village of Xylophagou was cut down from its stand at around 3.30am on 1 January, local officials say.

Nicknamed the "big potato", it made headlines around the world and on social media when it was installed in October 2021.

Many tourists posed in front of it, while some on Twitter questioned its suggestive shape.

The statue was created by community leader George Tasou to replicate the spunta potato variety local to the area.

According to reports, Mr Tasou was at the landmark until the early hours of New Year's Day and had asked someone else to guard it when he left.

But it was discovered vandalised, with around £4,000 in damage caused.

Mr Tasou has reported the incident to police and an investigation is ongoing.

Describing the sculpture to the Cyprus Mail in 2021, he said: "Xylophagou has a long legacy of potato growing and used to be the main potato grower in Cyprus.

"This helped the village grow into the 10,000-strong community it is today."