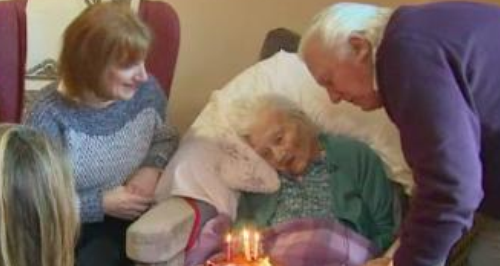 The pensioner, who claims she "doesn't feel a day over 75", has seen two different monarchs sit on the throne was born the same year the aeroplane was invented!

It seems no one is happier to be getting older than, Gladys Cooper, who celebrated her 113th birthday today.

The adorable senior citizen may have lived on this earth for over a century but she insists she feels as young as 75 years old.

How does she do it? Well, according to the bubbly young lady all it takes is the odd glass of sherry! (Cheers to that!)

The grandmother of four, who has six great grandchildren - the oldest of whom is 26 - said: "I have always taken it steady, and not rushed around. I have never smoked and I've just had an occasional sherry and eaten well."

There's no diva demands when it comes to presents for her landmark birthday either, because all she wants is to celebrate with a cup of tea and cake, surrounded by her family and friends.

Happy birthday to Britain's oldest person Gladys Hooper who is 113 today! And all she wants is some new teeth! https://t.co/IxDwyT8USh

Her wish was definitely granted, as 20 members of her family threw her a little celebration at her nursing home in Isle Of White and presented her with nostalgic photographs and a cake.

Forget glitzy holidays, as Gladys claims she loves nothing more than to spend time in the countryside.  She added: "I have always enjoyed people and music and the countryside, and always lived in England. It's quite something isn't it? I feel so proud and enjoy my memories".

Mrs Hooper, who was born the same year that the Wright brothers invented the first successful aeroplane, has seen some of the world's most historic moments not to mention some incredible first hand experiences of her own.

Just some of the extraordinary things the former concert pianist has witnessed include the downing of a German zeppelin during the First World War, and she even managed the first car hire company in the UK.

Last year she became the oldest person to undergo a hip replacement at the age of 112 and she claims it gave her a "new lease of life".

Well, we hope she'll be shaking those hips for more years to come!