This Freaky Video Shows There IS A Stranger Out There Who Looks JUST Like You! 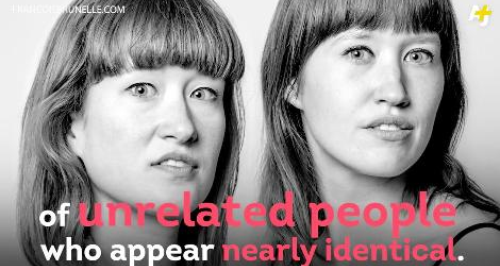 We've all heard stories about real-life doppelgängers but we never really believed it until now.

The idea of a doppelgänger has pretty much been restricted to the boundaries of folklore, which claims that every living person has a lookalike who is the spitting image of themselves.

In some traditions, meeting your doppelgänger is deemed to be bad luck, while others recognise their double as an "evil twin".

Either way it's more like something you'd see in a movie, more than real life. Or is it?

Well, a creepy new video online is proving that the possibility of having a stranger who looks identical to you, could in fact be a possibility.

The video, uploaded to Facebook, has already garnered more than 10 million views by people who are obviously fascinated by a string of real-life lookalikes.

According to the video, there is only a 1/135 chance that two living people will have measurably identical faces.

Among some of the cases are two Canadian twins who not only look alike, but both studied dance, got tattoos at the same tattoo parlour and even happened to live in the same building!

While the tale might sound like something out of 'Freaky Friday' photographer Francois Brunelle has documented over 250 doubles on camera as they meet for the first time.

"First they stare at each other like two dogs, or two cats. Then they become instant best friends!" he explains.

Could your double be out there too?