Every Worker NEEDS 'Meal Deal Talk' To Brighten Up Their Lunch Hour! 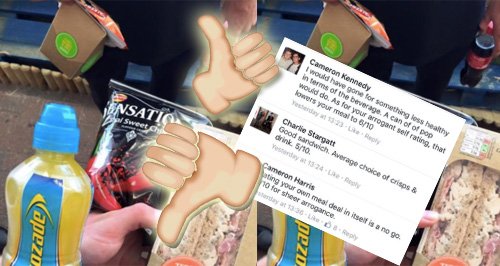 This hilarious Facebook thread is bringing the workforce together through food.

When you're working hard it's the little things that bring a smile to your face throughout the day.

Yep, it might sound trivial but its GOLDEN - in fact, you won't believe just how passionate some people get about their lunch choices.

Those who choose classic combinations such as a sandwich and a packet of cheese and onion crisps tend to be applauded, however users are little less forgiving to anyone who dares to pick up anything particularly left-field, like carrot sticks and hummus or a - God forbid - a Monster energy drink.

We've rounded up just some of the hilarious comments that made us chuckle over our BLT.

Just joined the meal deal talk group on Facebook and I have not been disappointed pic.twitter.com/v0NH6Whdcz

Meal Deal Talk - sheer brilliance. I don't know why I find it so amusing. pic.twitter.com/iMgRjRyZs4

What happens when you get a Boots meal deal pic.twitter.com/5AQR1jEdad

So I'm in a Facebook page where people rate each others meal deals... Heaven does exist pic.twitter.com/dbPkwkQ8Kj

Oh dear, who knew lunchtimes could be so controversial?