Fans Are Getting Harry Potter Scars TATTOOED On Their Foreheads! 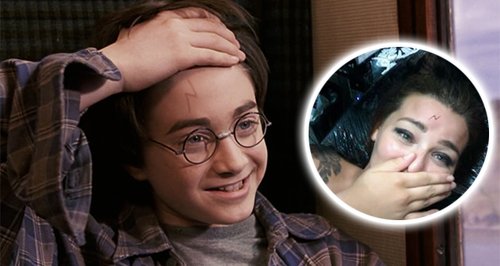 How far would you take your fandom? We think these people are utterly Potty!

There's one thing getting an intricate spell tattooed on your wrist or a Deathly Hallows symbol behind your ear. It's a totally different thing getting a tattoo of Harry Potter's scar on your forehead.

There are some really cool Harry Potter inspired tattoo designs out there but this is not one of them.

Read more: These Harry Potter Glow In The Dark Tattoos Are Officially A Thing

These bonkers holiday goers are taking their love for the franchise one step further by inking their forehead, so no one can take their seriousness to the cause lightly.

If you remember rightly, Harry received the lightening bolt shaped scar on his forehead from a spell gone wrong when Lord Voldemort tried to kill him when he was a baby. These people don't seem to have the same epic tale behind their forehead art.

We think it's safe to assume that Butterbeer may have had an effect on the decision making for these tattoos... But nevertheless, they are a brave statement (or a big mistake!).

And it seems like the trend isn't just in Magaluf - it looks like it's crossed the Mediterranean sea and has been spotted in Ayia Napa too!

Getting a tattoo when you're a little worse for the wear probably isn't the best idea. We bet these kids wished they could use a simple vanishing spell to remove the evidence of 'last night'... Evanesco should do the trick!