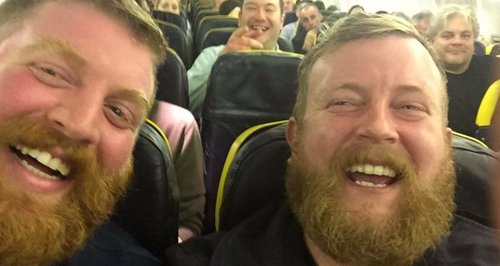 No, you haven't had a bit too much to drink but you are seeing double. You won't believe that these identical strangers aren't related...

Picture this: You're queuing up to board a plane. You file in behind other travellers, patiently waiting to get to your seat. Briefly scanning the row numbers and seat letters you find your seat only to find in the space next to it is... you.

That's what happened to Neil Douglas who met his doppelgänger, Robert Sterling on the same flight to Galway. And to top off the weirdness, after the flight the pair went their separate ways... only to find out that they were booked in to the same hotel!

They posted a photo to Twitter - the likeliness is uncanny.

Guy on right is the husband of my friend @elrottencrotch. Guy on left is a STRANGER he met on a flight last night! pic.twitter.com/kwBFOOEoMc

It turns out that this sort of thing isn't as rare as you might think. Twinstrangers.net has been specifically set up for people to find other people that look just like them! Here are some of the success stories so far:

Meet my Twin Stranger Karen! What do you think? I'm pretty freaked out about the likeness - Niamh pic.twitter.com/6vJnXkVjqA

We've found two new matches on http://t.co/5WpcGMT7OF what do you think? pic.twitter.com/GeswYwuiuJ

What do you think of our latest match? One woman from Germany the other Sweden! pic.twitter.com/ucQxP574zb

So, @Twin_Strangers think they may have found my twin! What do you guys think? RT if you agreepic.twitter.com/yxAEraizAM