Welcome To Jupiter! Is NASA Juno Probe In For A Tough Time In Outer Space? 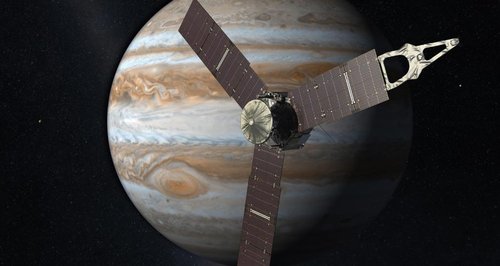 Forget orbiting the Earth, because Jupiter is bigger, badder and far more dangerous than anything NASA has attempted before...

It's been travelling for five years on a 1.8 billion mile journey, but NASA's Juno probe has finally (and safely) made it into orbit around the biggest planet in the solar system, Jupiter.

The Juno probe, which is roughly three metres wide, was forced to slam on its brakes for a very specific time of 35 minutes in order to slow down from 165,000 miles per hour and enter Jupiter's orbit...it's safe to say everyone at NASA was holding their breath!

If the probe misfired, even for a single moment, the whole five year mission would have been for nothing.

Can you imagine the pressure?!

Watch as the whole NASA team erupted into applause when Juno's autopilot functioned without a hitch...

So, what's next for Juno?

Well, this is where it gets exciting because Juno has a very important job to do.

The probe is specifically designed to conduct a whole host of experiments, as well as take pictures beneath Jupiter's thick atmospheric layer to see the surface underneath.

During its mission, Juno will circle Jupiter 37 times, with scientists hoping this is enough to test for atmospheric water and maybe even unlock some secrets of the galaxy...no, seriously!

Amazingly, Jupiter is thought to be the oldest planet in our solar system, so it could teach us a lot about how our system formed.

The time is now. Our #Juno spacecraft is about to enter orbit around #Jupiter! Watch live: https://t.co/KX5g7zfYQehttps://t.co/Fkjn2kP4ZG

Of course, all this depends on whether Juno can survive Jupiter's wrath!

The planet is dangerous to say the least, with HUGE levels of radiation that would fry your average machine in seconds.

Juno's scientific equipment is protected by a 400lb titanium shell, but after 20 months it's thought that the computers will give up from radiation. After this point, the £828 million project will be crashed into the surface of Jupiter to avoid ending up as space debris around Jupiter's moons.

Good luck Juno! We'll keep you updated on all the amazing things Juno sees in the coming months.