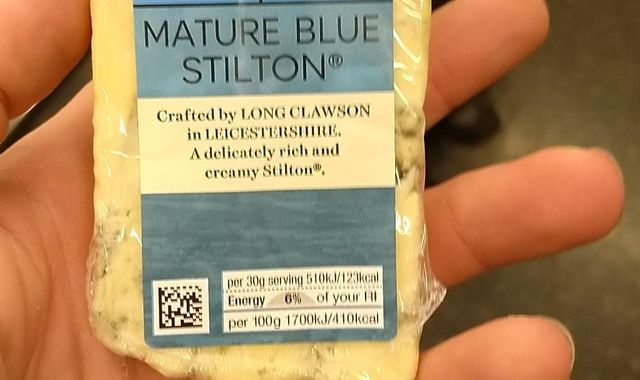 A man has been jailed for 13 years after his fingerprints were analysed from a photo of a block of cheese.

Carl Stewart shared the M&S Stilton picture - but made the mistake of showing his fingers and palm.

He may have thought he was safe because he was using an EncroChat phone, a highly encrypted device used by criminals.

However, police cracked the system last year - leading to the arrest of hundreds of people in the UK suspected of murder, gun smuggling and serious drug trafficking.

Sixty-thousand users - about 10,000 of them in the UK - have been identified globally as part of Operation Venetic.

He pleaded guilty to conspiracy to supply cocaine, heroin, MDMA and ketamine, and to transferring criminal property.

Detective Inspector Lee Wilkinson said Stewart had been "caught out by his love of Stilton cheese".

"His palm and fingerprints were analysed from this picture and it was established they belonged to [him]," the officer said.

Stewart had used the name Toffeeforce to conduct his EncroChat deals.

Mr Wilkinson added: "As part of Operation Venetic, Merseyside Police has so far arrested more than 60 people, many of whom have been charged with serious drug trafficking or firearms offences.

"This year will see a number of these people continuing to appear before the courts, and we welcome each and every one."

Ed Sheeran: Home video of singer performing in school production of Grease to be sold at auction