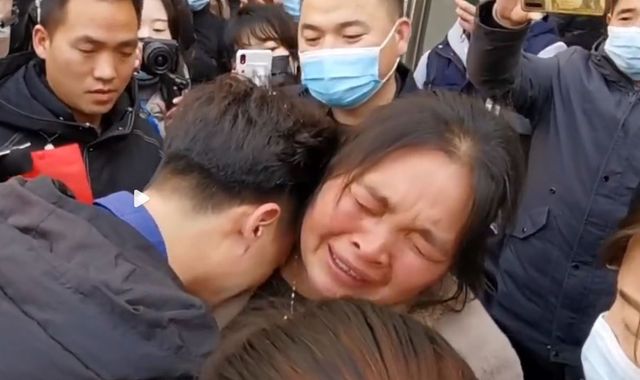 A man who was abducted by a child-trafficking gang at the age of four has been reunited with his family after sharing a map of his home village drawn from memory more than 30 years later.

Li Jingwei, from the Chinese province of Yunnan, said online that he had endured "countless nights of yearning" and been "homesick since I was little".

After hearing that other abducted children had been reunited with relatives, Mr Li shared a video on the Douyin app - known as TikTok outside China - in December.

It includes his map, which police matched to a small village and a woman whose son had disappeared.

The link was made despite Mr Li remembering neither the name of his birthplace nor his road.

Following DNA tests, he and his mother were reunited on New Year's Day.

A few days beforehand, they spoke virtually. "My mother cried as soon as I got on the phone," Mr Li said.

"After the video call, I recognised her at a glance. My mother and I have the same lips, even my teeth."

Almost all of what he recalled during their conversation was correct, "including the house in my painting, which is still the same now, except that it is unoccupied".

After being abducted in 1989, Mr Li was taken to a family in Lankao, 1,000 miles from his family home. Almost straight away, he began to draw pictures on the ground with a stick, helping him to remember his birthplace.

"I have formed a habit of drawing at least once a day," he said in an interview with Chinese outlet The Paper.

Certain details remained with him, he said. "I know the trees, stones, cows, and even which roads turn and where the water flows."

Family characteristics were still in his memory, too. His "face, eyes and forehead" are like his father's, he said.

Discussing the abduction, Mr Li said he was taken by a man with a bald head. He knew him and "had no defence against him".

Later, a couple in their 40s bought him some new clothes and took him on a train journey lasting a day and a night before handing him to an adoptive family who treated him well, he said.

"They taught me the principles of being a human since I was a child, so that I could study hard and become a talent in the future."

Mr Li said his birth father is "gone" but he has a younger brother at home. And there is another family member who was abducted as a child, too.

"I also have a sister-in-law who has lived in my house since childhood and played with me every day," he said.

"I used to think she was my eldest sister. She was also abducted, but she had read books when she was abducted, and later found her home."

(c) Sky News 2022: Man kidnapped as a child in China reunited with family after drawing map of home village from memory