'My Baby's Got A What?' The Moment Mum Discovers She Didn't Have The Baby She Was Expecting! 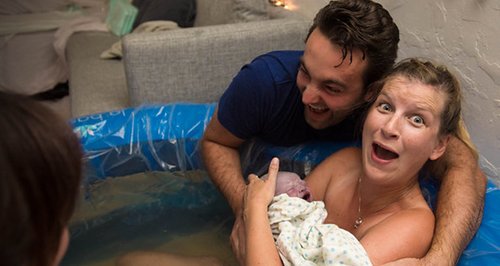 That awkward moment when you're expecting one sex of your baby but unexpectedly deliver another...

There's always that one moment during pregnancy when you have to decide whether you want to know the sex of your baby. While some parents want to know, others wait to find out when it comes.

Although mum-of-two Kim Guiley, from California, decided that she didn't want to know the sex of her baby, she got it in to her head that she was having a little girl.

Can't stop laughing at this awesome capture by our birth photographer @susannahgill_photostorytelling... After a lifetime of dreaming about one of each, but months of feeling so strongly that we were having another girl, this is the moment we discovered Theo's sex!!

However, Kim and her partner Travis got the shock of their life when they were told that they had a son, just after giving birth.

The hilarious moment was captured by photographer Susannah Gill Photographic Storytelling - and Kim admitted that she "can't stop laughing" at the photo.

The look of surprise on the happy parent's faces is certainly priceless!

Kim wrote alongside posting the photo: "After a lifetime of dreaming about one of each, but months of feeling so strongly that we were having another girl, this is the moment we discovered Theo’s sex!!"

I call this image "5:01 am", the incredible moment when Kim birthed Baby Theo. The photo masters will say to search for triangles in your images, well I'm proud this triangle! Mama clutching her new baby, a thrilled Dad and then the midwife checking her watch! Today was a day I designated all summer as work day I would play hooky for! It's Jax's last day of pre K summer school and I swore up and down I would do NOTHING all day at home while he was at school. Well the nothing I wanted to do was work on these images. Birth photography there is nothing quite like it! You know that expression- "Do what you love and you will never work a day in your life?" Well it rung true today. Email I'll save you for tomorrow while Jax plays with his toys. Not doing emails today felt like hooky enough!#susannahgill #birthphotography #birthwithoutfear #familyphotojournalism #dayinthelife #empoweredbirthproject #midwife #waterbirth #homebirth @blendingbeautiful @travisguiley

She added on her blog, Santa Cruz Family Doula Collective: "Shocked s an understatement - I was blown away and totally elated. I have always dreamed of having both a daughter and a son but throughout my pregnancy, I had convinced myself we were having another girl.

"In that perfect moment, all of my dreams had come true. My family was complete."