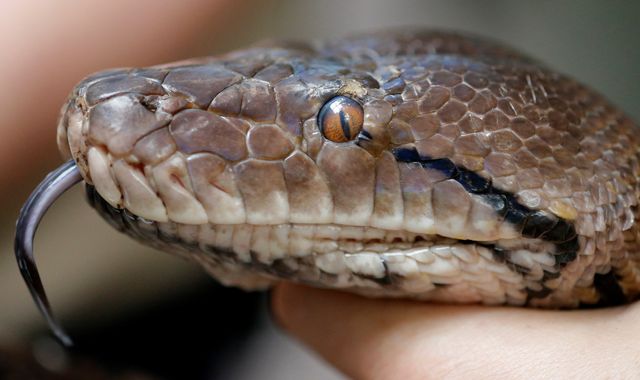 A 65-year-old man was left with minor injuries after a reticulated python bit him while he was sitting on the toilet.

He was said to have felt a "pinch in the area of his genitals" before noticing a five foot (1.6 metres) snake beneath him in the toilet bowl at his home in the Austrian city of Graz.

The python, a constrictor native to Asia which can grow to a length of nearly 30ft (nine metres), is thought to have found its way into the toilet via the network of drains.

"Shortly after he sat on the toilet the Graz resident - by his own account - felt a 'pinch' in the area of his genitals," the police said in a statement.

The victim needed treatment in hospital for minor injuries.

Although the snake's suspected route into the toilet could not be confirmed, it is thought to have escaped from a neighbour's apartment.

A reptile expert contacted by the emergency services removed the snake from the toilet, cleaned it and returned it to its owner.

A 24-year-old neighbour, who owns 11 snakes, has been reported to the prosecutors' office on suspicion of negligently causing bodily harm, the police added.

Reticulated pythons are the world's largest snakes and do not attack humans by nature.

However, they will constrict or bite if they feel threatened or if they mistake something for food.

(c) Sky News 2021: Nasty surprise as man bitten by python while sitting on the toilet