Plan to trap and relocate 'selfie bear' in Mexico 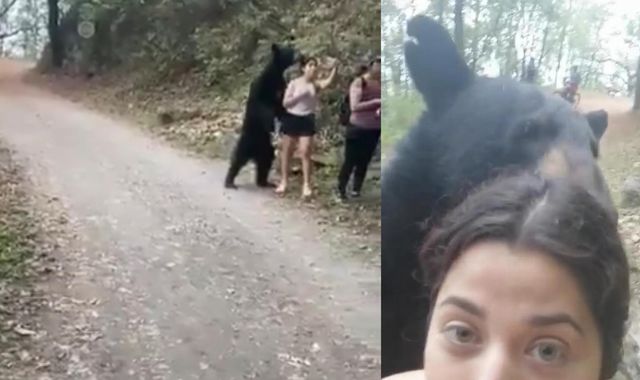 An online campaign has been launched to stop a beloved bear from being trapped and relocated.

The black bear became an internet sensation last week when footage was posted of it appearing to pose for a selfie with a hiker in Mexico's Chipinque Ecological Park.

But Mexican authorities said they had set several non-lethal traps for the bear so it could be relocated.

A petition at Change.org has more than 135,000 signatures and calls for the bear to be left alone.

It says people should instead be kept out of the park in northern Mexico because of the coronavirus lockdown.

The bear had approached a group of hikers, standing on two legs to paw them and inspect them.

It appeared to rest his chin on a woman's shoulder, looking into the camera as if posing for a selfie.

She took a photo and the bear stood just long enough for the picture before going back to all fours.

The animal had eventually wandered away without causing any problems.

Experts later said the bear's calm behaviour could be explained by the tag on its ear, meaning it might be accustomed to human contact.

Following the circulation of the video, Chipinque Ecological Park issued a statement saying it would take "strict measures" against visitors who put their life and/or wildlife at risk.

"This type of approach by the black bear to the visitor is an abnormal behaviour caused by humans. The interaction shown in the video should have been avoided. What is indicated is to move away when detecting the presence of the bear and not get closer; however we see that even the person seeks to take a photo.

"Given the above, Chipinque will take strict measures against visitors who put their life and / or wildlife at risk. Remember that Chipinque is a protected natural area, home to wild flora and fauna, so the sighting of mammals is not unusual, and it is the responsibility of the visitor to stay alert during his visit, avoid getting close and report the presence of a bear to our park rangers."