It's totally normal to prioritise Pokemon over your work...

A broadcaster's mission to become a fully fledged Pokemon trainer seemingly took over her day job when she embarrassingly interrupted a live weather report in her bid to capture the pocket monsters.

In a short clip that's gone viral online, the TV presenter becomes so transfixed with the gaming app that she saunters in front of the camera during a live broadcast.

Apparently, Allison Kropff, an anchor for WTSP in Florida was so wrapped up in her virtual world that she forgot where she was!

With her eyes glued to her mobile phone, she stumbles right in front of shocked weather man Bobby Deskins as he attempts to read the forecast.

Making light of the situation he jokes: "She's looking for Pokemon." 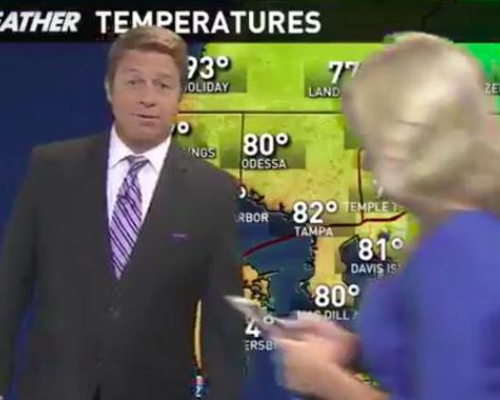 Read more: Tom Hiddleston OWNS taylor Swift In A Dance Off At The Met Gala

Then he tells viewers: "You guys have got to be careful with these phones and this Pokémon. You're just walking around all over the place."

Unless you've been living under a rock for the past few days, you'll probably know that Pokemon (you know, those trading cards that sent every ten-year-old into frenzy back in 2001?) made a comeback in a HUGE way.

Now, those looking to relive their childhood memories can become a real Pokemon trainer through a new app called Pokemon GO which uses augmented-reality technology to bring the creatures to life.

Users can actually go hunting for characters such as Pikachu before training them up and battling with other users.