Police Officer Shocks Everyone With THIS Tearjerking Proposal. 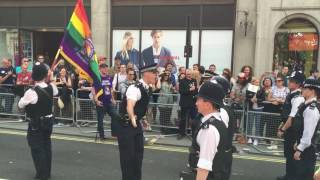 We desperately tried to hold back the tears whilst watching this romantic moment...

One police officer was willing to put his duties on hold to ask his partner a burning question at Pride festival over the weekend.

More than 100 police officers took part in a march as thousands flocked to the capital to celebrate the lesbian, gay, bisexual and transgender community, but one copper needed to make an important stop along the way.

Amid the sounds of cheers, whistles and music, he broke away from his rank and walked over to his partner who had been cheering him on from the sidelines.

Read more! Did You Notice This HUGE Mistake In 'Friends'?!

Taking off his hat, the officer got down one knee and popped the question to his beau, who wasn't able to contain his shock.

He wasn't the only one who thought about popping the question either!

Another touching image, also saw a police officer propose to his partner, who was also a colleague, in the middle of the parade.

Both touching images have since gone viral, with many taking to Twitter to congratulate the couple and share their support.

@MetLGBTNetwork @LondonLGBTPride @LGBTpoliceuk
I grew up in 50's&60's where gay people had to hide.
Now they can be open and full of Pride.