A military family has been given the Christmas of a lifetime after being reunited with their dad.

Christmas is a time of year for family and loved ones, however, one family were at risk of having a notable face absent from their dinner table this year.

An adorable video has surfaced online has the internet in tears after two boys are reunited with their dad just in time for Christmas.

Declan and Connor Gibson, aged 11 and 7, had their Christmas wish granted when their RAF serviceman father arrived home after four long months away in the Falklands.

The two boys are seen asking Santa to give them the present of a lifetime, by being able to spend Christmas with their dad Chris Gibson and the moment he walks through the door is tearjerking.

Speaking on the special moment at Santa’s Grotto in Drayton Manor theme park, Chris said: "I’ve been looking forward to this for a long time. I was very nervous waiting to see them; when I saw the boys in with Father Christmas my heart was racing.

“It was extremely emotional and I can’t tell you how happy I am to be home.” 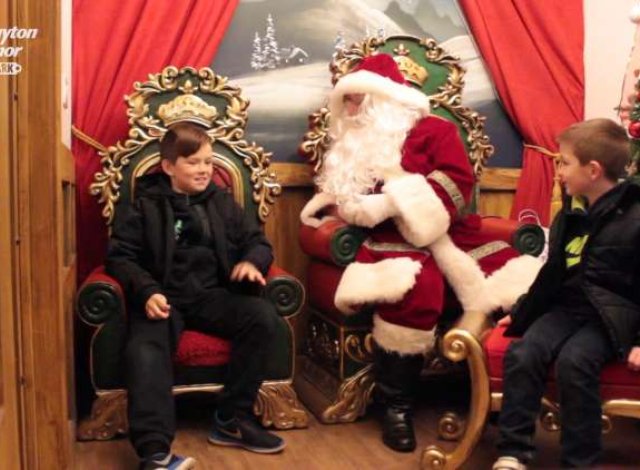 Chris, who has been in the RAF for 16 years, has been married to wife Abby for eight years after meeting in Cyprus, lived on base together until they bought their own home in Gloucester.

Abby said: “All I’ve wanted is a hug from Chris and this was the most magical experience.

“[Declan and Connor knew their dad was coming home at some point in November but I didn’t tell them the exact date as I wanted it to be a surprise."

Chris said he was unsure when he would have to return to the Falklands but is planning to enjoy Christmas with his family.

He said: “We’re planning to make the most of every second as a family."