Does Tapping A Coke Can Actually Stop It From Fizzing Up? Science Has The Answer... 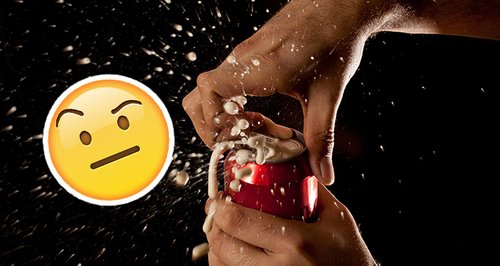 Are you a coke can tapper or a non-believer?

Do you ever feel like a bit of a melon tapping the top of a coke can to stop it from fizzing over before tucking in? Or are you a sceptic convinced it doesn't work?

Well, science has spoken and it seems to suggest that the technique might actually work!

Read more: Will Your Relationship Go The Distance? Only Science Will Tell...

Christopher Arthur Edward Hamlett, a chemistry lecturer from Nottingham Trent University, wrote an essay for The Conversation trying to explain the science behind it.

"When these bubbles reach a certain size they detach from the inside of the can and rise up to the top of the can due to buoyancy and displace liquid in their path.

"When a can is opened, the bubbles expand with those deeper within the liquid travelling further than those near the surface, displacing more of the drink and possibly resulting in greater amounts of ejected liquid. A “tapped” can will have fewer of these “deep” bubbles and so less liquid will be dislodged – and possibly sprayed out – than an “untapped” can."

Get it? We think we do... All we know is that we're going to keep on tapping because, well, science says so!