Cheeky tot, Iris Wronka stole the show while appearing on ITV News alongside her older brother George and her mother Lucy during the lunchtime bulletin.

Viewers of ITN News were left cackling at their TV screens after a debate surrounding milk allergies quickly went downhill when a toddler clambered onto the desk in front of newsreader Alastair Stewart during an interview with her mum.

Cheeky tot, Iris Wronka stole the show while appearing on ITV News alongside her older brother George and her mother Lucy during the lunchtime bulletin.

Read more: This Is What Happens When Dad Let's Toddler Do Weekly Shop

It appeared as though newsreader Alistar was amused by the unexpected move from the toddler but was forced to carry on the bulletin without distraction.

Little Iris was so bored when her family took part in the segment about new guidelines surrounding testing for milk allergies in babies that she became impatient and left her chair. 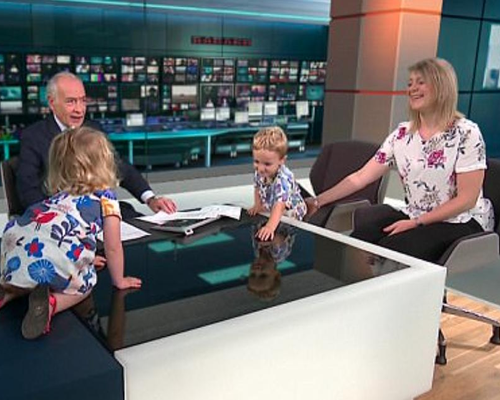 Unexpectedly, she climbed on top of the table, after an unlucky first attempt and while up there she tried to high-five the newsreader.

The presenter then informed viewers that Iris 'will do whatever she chooses to do for the next couple of minutes', before trying to continue with the interview.