Luke Howard began playing his piano on Saturday morning and said it was his ‘last throw of the dice’ to win back the girl who broke his heart.

A heartbroken musician decided to give a musical tribute to his ex-girlfriend by setting up a piano in the centre of Bristol where he vowed to play non-stop until she came back to him.

Luke Howard began playing his piano on Saturday morning and said it was his ‘last throw of the dice’ to win back the heart of the girl who broke his heart.

The 34-year-old man, who hails from Bath said he didn’t know whether the lady, referred to as "Rapunzel", would appreciate his efforts but was determined to ‘let her know just how much I love her’.

Luke admits he was left devastated when their four-month relationship broke down and hasn't been the same man since.

“It wasn’t anything nasty or bad, it was just life getting in the way. If it was anything bad why we split up then I wouldn’t be doing this, but it’s the only thing I can think of doing,” he said. “It just seems life just got in our way."

“It may sound whimsical but she completely changed my life. My entire world shifted.

“I know people in my situation will send flowers or text or write letters but that only ever seems to make things worse. I wanted to do something that she might see, to let her know how much I love her, that she can see it and then take it or leave it,” he added. 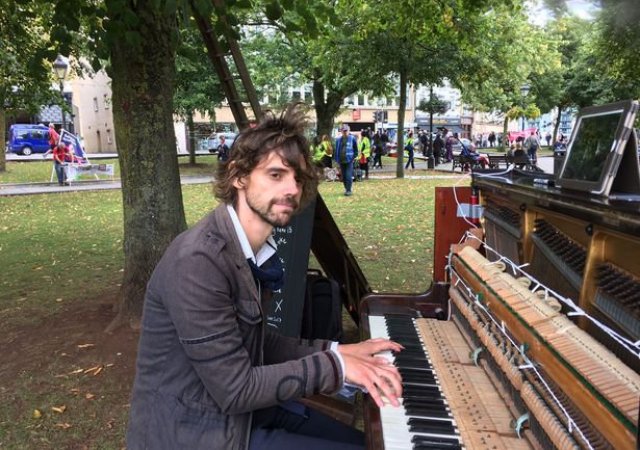 “I’m just going to play. I was totally devastated and didn’t know what to do. The more I thought the worse it became and the only thing I could think to was play.

“I don’t know what will happen. She’s a very organised person, very practical and I’m just trying to show her I’m really serious about us. It’s a kind of off-the-cuff thing, and I just want her to know how much I love her, to give us a chance rather than leave it there. I’m not ready to throw in the towel just yet.”

Luke has set up a Facebook page for his quest – called ‘For Love’ – and has vowed to play until he can play no more, whether that is days or weeks, or until his ex girlfriend sees and gets in touch.

“I’ll have a little sign up explaining why I’m doing it, and actually the fact this rally is going on might help get the word out,” he explained.